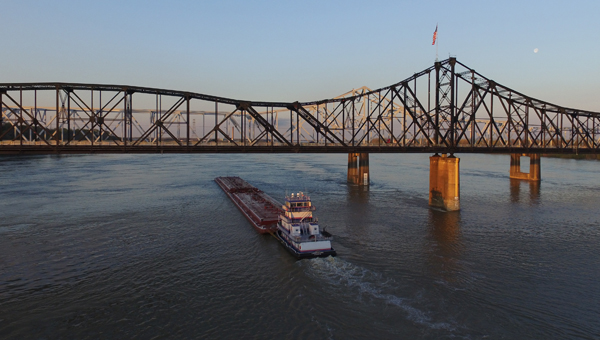 While Democrats and Republicans negotiate the extent of a national infrastructure bill, one sector of the nation’s economy has projects ready to go.

In a report from Waterways Council, Inc., a total of $7 billion in projects along inland waterways — including the Mississippi River — are among those they hope will be fully funded if and when the infrastructure is finalized and allocated.

In March, the American Society of Engineers released its 2021 Report Card for America’s Infrastructure, which graded the condition of 17 categories of infrastructure, including inland waterways docks, dams, drinking water, roads, levees and more. In that report card, inland waterways received a “D+” due to “delays from unscheduled lock and dam closures.”

It is that grade Waterways Council and local maritime operators are hoping to improve with investments from the debated infrastructure legislation.

“Our goal is to make sure the (U.S. Army Corps of Engineers) is funded at least at full and efficient levels so they can build out the system, they can do major rehab on the system and that includes dredging, but also modernization by building new locks and dams,” Waterways Council Senior Vice President Debra Calhoun said in a recent visit to Vicksburg. “Our portfolio of locks is not in great shape. Many of them were built in the 30s and 40s, are showing their age and have outlived their 50-year design life.”

And while local operators and advocates are looking to the proposed legislation, which has been initially set at nearly $2 trillion, for investments in the system, they said any money spent on the system will “ripple back” to Vicksburg given the interdependent nature of the inland waterways system.

“If there is a failure somewhere in the system, it affects Vicksburg even though it’s not here,” Austin Golding, with Golding Barge Line, said. “Something that breaks across the country, no one here knows about it. We are lucky to be on the lower end of the supply chain, where we do not have a lot of locks and dams in Vicksburg. We are in a really good spot compared to others, strategically. But we are so interconnected to other systems.”

He said operations on the Tennessee-Tombigbee between Alabama and Mississippi impact industries that ship their products by rail to Vicksburg for export, meaning that a dredging problem, or mechanical issues with locks and dams on that river, would have an impact on operations here.

“It is all interconnected, so if you have an outage, it is not in isolation,” Calhoun said. “It can cut off navigation completely, it can stop Chicago-O’Hare from getting its deicers for their planes.”

And commercial operators, like Golding Barge Line, are not sitting on the sidelines looking for government help. They are among those helping pay for ongoing infrastructure work throughout the inland waterways system.

Currently, commercial operators pay 29 cents for every gallon burned while on the system into the Inland Waterways Trust Fund, which helps support construction projects. In 2014, operators, knowing more money was needed for maintenance and development of the system’s infrastruture, asked the federal government for an increase from 20 cents to 29 cents.

But as for what may come from the finished infrastructure bill, Golding said not to focus on what may come directly to Vicksburg, but look elsewhere.

“Vicksburg could benefit from money not directly spent here,” he said. “If all of a sudden, we have more ships, more efficient locks on the river, and in a very broad statement, if it becomes a better system, a more efficient system to use, then Vicksburg will benefit from that. It doesn’t necessarily mean money has to be spent here in the Warren County section of the river or the Port of Vicksburg for us to be a beneficiary of it.

“Every bit of efficiency the river system gains over rail, over truck, on pipeline, you have a top 25 port here,” he said. “If you have a port in your town, you need to support national projects as much as you can even though they are not being spent here.”

Mississippi has more than 870 miles of navigable inland waterways, ranking it 12th in the nation, according to the National Waterways Foundation.

Editor’s Note: An earlier version of this article incorrectly listed the amount of inland waterways projects at $6.3 billion and the cost of the Biden administration’s infrastructure proposal at $2 billion. We apologize for the error.

Flaggs: Mask mandate, other COVID restrictions could be lifted…