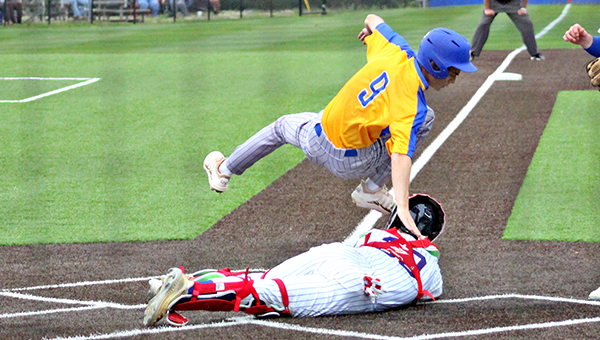 When they dissect this baseball season and look ahead to 2022, the Warren Central Vikings have plenty of things — big and small — to work on.

In the immediate aftermath of the final loss of 2021, however, there wasn’t much need for soul-searching. No coulda’s or shoulda’s, no single play that turned the tide. They simply faced an opponent with superior talent that ran through them with machine-like precision and made their stay in the MHSAA Class 6A playoffs a short one.

Easton Wood hit a three-run home run, while Mason Morris allowed one run and struck out seven in a five-inning complete game to lead Tupelo to an 11-1 win over Warren Central Saturday in Game 2 of their first-round playoff series.

Tupelo (23-7) swept the best-of-three series 2-0 and advanced to face Oxford next week.
Warren Central finished the season with a 9-19 record. It failed to reach the second round of the playoffs for the first time since 2014.

“All year long we’ve shown signs, whether it’s an offensive approach or trying to bust a guy in, or go up on an 0-2 count,” Warren Central coach Randy Broome said. “At the end of the day it boils down to the nuts and bolts of baseball — throw strikes and play defense, and get a timely hit here and there. If we hit the ball well it seemed like we didn’t have pitching or defense. If we had pitching or defense, we struck out 18 times. We just never put that together. I think a lot of that is experience.”

Tupelo did put it all together and plowed through the Vikings for a quick two-game sweep. Both games were shortened to five innings by the 10-run mercy rule.

The Golden Wave scored in every inning in the series and only committed one error. Pitchers Hunter Elliott and Morris, an Ole Miss signee and commit, respectively, allowed a total of four hits and combined for 18 strikeouts.

“You preach the error column, three or more and you’re going to get beat. The data proves it, and that’s been our M.O. all year,” Broome said. “I didn’t think Shealy threw bad, but we didn’t help him when we needed to help him and that’s it in a nutshell.”

After winning Game 1 by an 11-1 score, Tupelo steadily pulled away for another run-rule victory in Game 2.

Hood hit an RBI single in the first inning and a three-run home run in the fourth, and a string of walks, errors and hit batters in between allowed Tupelo to build an 8-0 lead.

A two-run single by Morris and an RBI single by Will Hodges in the fifth made it 11-0.

Warren Central’s offense finally came to life in the bottom of the fifth inning, as it got three of its four hits and its only run. Shealy snaked an RBI single down the right field line to score Cooper Orman. The Vikings left the bases loaded, however.

“When it’s the repetitive we have a chance to make a play and then we don’t type thing, the air is out of the balloon,” Broome said. “That goes back to being young. It’s trying to find that way that this is what I’ve got to do to stop the bleeding. Sometimes it’s a great play. Nine times out of 10 it’s a routine play. Once we got on a roll, it’s ‘here we go again.’ We couldn’t pick ourself up from that.”

On top of being the better team in both games, Tupelo also caught a couple of lucky breaks in Game 2.

WC’s Blake Channell, who finished 2-for-2 with a double, was thrown out at third after an errant pickoff throw to second base went into center field in the third inning.

In the fifth, with a runner on first and no outs, Tupelo’s Bo Jaggers swung at a pitch and had the bat fly out of his hands and into Warren Central’s dugout. While the Vikings scrambled for safety and all eyes shifted to the chaotic scene, no one noticed that the ball was still in play. McClain Ray alertly went from first to third and wound up scoring a run.

Earlier in the game, Tupelo’s Kyle Washington scored on a wild pitch. He slid into home and flopped over catcher Seth Sterling to somehow avoided the tag.

Crazy plays like those, Broome said, were no accident and he wants his players to realize it.

“I’m a Christian and I believe in God, but I also believe that there are baseball gods,” Broome said. “When you don’t do the little things right on a daily basis, all those things show up. That’s where you make your breaks. We’re trying to get them to buy into that.”

That process will begin in a few weeks, when Warren Central’s returning players reconvene for the summer practice period. It will be the program’s first full offseason since 2018. Construction on its field in the fall of 2019 and then the COVID-19 pandemic in 2020 have hurt the development of young players.

Broome said he’s planning to shift away from the tradition summer schedule of twice-weekly doubleheaders, reimagine some workouts, and hit the reset button after a disappointing season.

“It’s back to the drawing board,” Broome said. “Your sophomores are now juniors, your juniors are now seniors. You get a chance to get into an offseason that we hadn’t had in a minute, from June through December. We’re going to use that time this summer to start from scratch.”