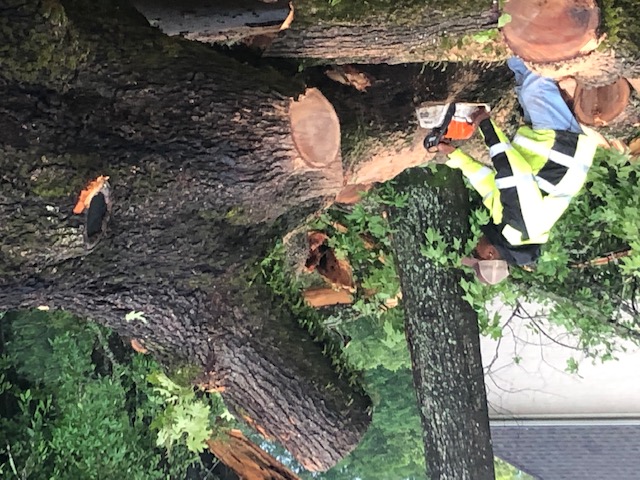 The Warren County area was hit by an EF-1 tornado Tuesday when a squall line preceding a cold front passed through in the mid-afternoon, according to information from the National Weather Service.

The information follows a visit Wednesday by an assessment team from the Weather Service’s Jackson Office.

“We’ve been out since this morning with MEMA (Mississippi Emergency Management Agency) and the drone and we found some evidence there was some possible rotation in some locations, but we never did find a real track for it,” Warren County Emergency Management Director John Elfer said.

“There’s some significant damage out there,” Elfer said. “It could have been a lot worse. I think we had a combination of a tornado and straight-line winds.”

Based on information gathered from EMA assessments in the county and reports from property owners, he said, 11 homes had some sort of storm damage from affected to destroyed. No injuries have been reported, Elfer said. He said the county Emergency Management Facebook page has a link where property owners can report damage.

He said roads “for the most part” are open.

“There may be a few where there is a section or two closed,” Elfer said. He said utility crews, county road crews and public works crews with the city of Vicksburg are working in different areas to either restore power or clear roads.

In the city, North Ward Alderman Michael Mayfield, who is over the city’s public works department, said damage in the North Ward was widespread.

“We’re still picking up trees that had (electrical) wire,” he said, adding Entergy crews have been able to remove the wires to allow city crews to cut and remove downed trees.

“You can’t do anything until they’ve given you the go — that they’ve removed the wires,” Mayfield said. With the wires removed, he said the city crews can remove the debris to allow the utility workers to enter an area and restore power.

He said the problem with power outages “is improving drastically. There’s still some out but not near as many as there was yesterday. Most of your areas north of Clay Street are continuing to improve. People are calling me, letting me know that it’s back on. It’s getting better by the hour.”

South Ward Alderman Monsour called the Porters Chapel area of the South Ward “the epicenter.” He said at least two or three houses appeared to have been destroyed.

“There are trees down everywhere and it seems like each tree that went down took a power line with it,” he said. Monsour said utility crews were working in the area trying to get power restored.

“We still have some live power lines down and we want to take care of those so no one gets hurt,” Monsour said.