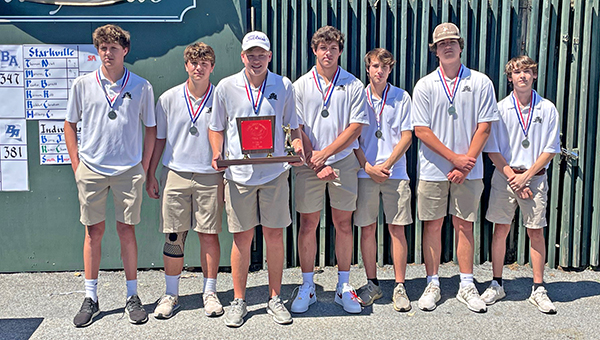 St. Aloysius golfers Will Keen, Chase Tucker, Greyson Simmons, Caleb Tucker, Thompson Fortenberry, Aiden Dickerson and Zac Cowart stand with their team trophy after finishing second at the MAIS Class 4A tournament Thursday in Meridian. Joshua Larsen is also on the team, but is not pictured. (Submitted to The Vicksburg Post)

Will Keen shot a 79 to finish in the top 10 of the individual standings, Joshua Larson and Chase Tucker shot 82 and 84 respectively, and the Flashes posted a team score of 343 to finish second at the MAIS Class 4A golf tournament at Northwood Country Club in Meridian.

Lamar School won the team championship, with a score of 308, and Bayou Academy was third with 347.
Cathedral’s Chase Kaiser shot a 68 to win the individual Class 4A championship. Kaiser played in an early group and then waited for the rest of the scores to come in after posting his impressive number.

Bayou’s Collin Runnell wound up the closest, five shots back at 73.

“I wasn’t playing with anybody who was close to my score,” Kaiser told the Natchez Democrat. “I really didn’t know how anybody else was doing on the course. I was just trying to stick to what I was doing.”

The Flashes had won the South State championship last week, but could not keep up with Lamar’s loaded roster.

Lamar had four golfers break 80 and cruised to the team championship. Ron Polizzi was its low scorer with a 74, Ben Bryan shot 77, Brady Lagendyk shot 78, and Conner Larkin 79.