After two years as assistant, Lawrence takes over as WC’s girls soccer coach 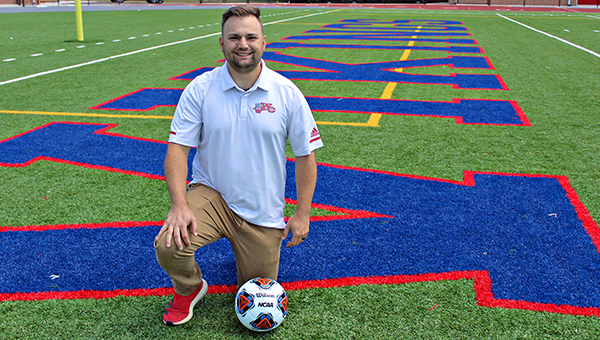 Jeremy Lawrence, who has been an assistant with Warren Central's soccer program the last two years, has been hired as the next head coach of the school's girls' team. (Ernest Bowker/The Vicksburg Post)

When he took over as head coach of Warren Central’s girls’ soccer team in 2018, Greg Head never intended for it to be a lifelong commitment.

Already working as the boys’ coach, Head knew the extra hours and workload of managing a second team would eventually wear him down. He wanted to help the girls’ program through a sudden coaching transition and then hand it off, although he didn’t know to who.

Then he met Jeremy Lawrence.

“I met Mr. Lawrence at Terry about three years ago,” Head recalled. “He was coaching over there and he was telling me about how he graduated from Warren Central. I said, ‘Oh really? Well there’s going to be some openings over there and you may want to check into it.’”

Lawrence did, and came aboard at Warren Central as Head’s assistant coach. Now, two years later, he’s leading his own program again by replacing Head as the school’s next girls’ soccer head coach.

Lawrence is a 2006 graduate of Warren Central, and said getting a chance to coach at his alma mater is fulfilling.

“I graduated here, I played my career here and then in college, and it feels like it’s a good come full circle story,” Lawrence said. “I’m glad to be home and glad to be supporting where I came from. And having Coach Head with all the years of success he’s had endorse me, and put his stamp of approval on me, it’s a big deal to me.”

Lawrence also thanked those who supported him during the hiring process.

“I just want to thank Coach Head, and (athletic director) Preston Nailor, and the school board and everybody for having faith in me, and I’m not going to let them down,” he said. “And I want to thank my wife for being my support and rock. Without her I wouldn’t be where I am today.”

Head will remain as Warren Central’s boys’ coach. He said that while he enjoyed working with both teams, it was often an emotional rollercoaster on game day. Mississippi high school teams play girls-boys doubleheaders with only about 15 minutes between games, so for Head there was little time to decompress and process the girls’ game before mentally switching over to the boys.

“After about three years it took its toll on me. It wasn’t the practices, it was the games, which I thought was going to be the easiest part,” Head said. “When you get this emotional high and your adrenaline starts pumping, and then after about an hour and a half you relax, but then it’s like, ‘Boom, I’m back in it again.’ After three or four hours of that, my heart can’t take all that. I’m too old. So I knew I didn’t want to do it forever.”

Thankfully, he didn’t have to. Head and Lawrence met when Warren Central played Terry during the 2018-19 season. Lawrence was in his second season as Terry’s head coach at the time, but he and his wife were already considering moving back to Vicksburg.

Lawrence was hesitant to give up a head coaching position to become an assistant, but with everything else falling into place decided to make the move and came to Warren Central to work for Head.

“It was like pieces of a puzzle clicking together,” Lawrence said. “The funny thing is my wife and I just had our first child and were already talking about moving home. The big conversation we were having was should I just drive to Terry every day from Vicksburg? We were already in the process of thinking about it, so when he started talking about it, in my mind I said you’ve got to be kidding me. It’s like everything is lining up.”

Lawrence said he’s come to appreciate being back at Warren Central and seeing a different side of the school over the past two years than he saw as a student.

“It’s been refreshing for me, because it’s been a comfortable familiarity, but at the same time it’s a different point of view. Some of the teachers here are some of the teachers who taught me. Getting to see that from a different side has been great,” Lawrence said. “I feel like I have a lot more pride in being here, because I feel like I have a lot more riding on it. I want to see the program do well, and I want to see the kids do well. Being that they’re Vikings also, it makes me want to try harder to be better.”

Head stayed on as the girls’ head coach through the 2019-20 and 2020-21 seasons, he said, to help his successor. Warren Central lost all 11 starters from one season to the next, and Head said he didn’t want to put someone in the difficult situation of having to totally rebuild the program when handing over the reins.

The Lady Vikes went 9-9-1 this past season and have most of their key players returning.

Lawrence has already started working with some of the returning players, and will fully put his stamp on the program soon. Tryouts were held last week, and a summer schedule that includes three tournaments and two practices a week through mid-July is drawn up.