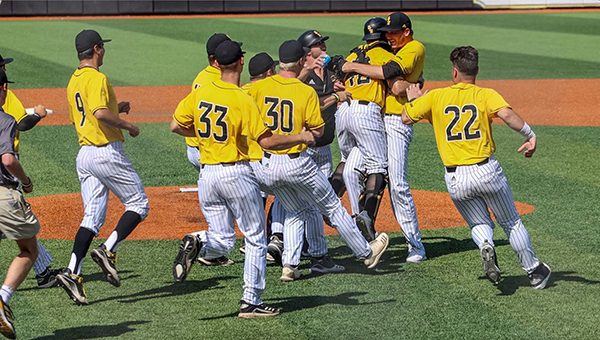 HATTIESBURG — Outstanding pitching has been a theme for Southern Miss this entire season, and it rarely gets better than it did Saturday.

Walker Powell through a seven-inning no-hitter in the first game of a doubleheader against Middle Tennessee, and Ben Ethridge threw a 67-pitch complete game in the nightcap as Southern Miss swept the Blue Raiders 6-0 and 9-0.

Powell’s no-hitter was the first by one Southern Miss pitcher since Cliff Russum did it against Eastern Illinois on March 13, 2004. Three pitchers had a combined no-hitter against Rice in the 2019 Conference USA Tournament.

“I couldn’t ask for a better way to go out if that was my last time at Pete Taylor Park,” said Powell, a sixth-year senior. “That was a special moment, man. To me, it just caps off a long career at Southern Miss, a lot of hardships and ups and downs through it all. It’s a great way to go out.”

Powell (8-2) allowed just one base runner in his performance, a walk to open the second inning, as he faced one batter over the minimum. The senior from Fayetteville, Ark., fanned a career-high 12 batters and threw 60 of his 89 pitches for strikes.

Andrew Stanley and Reed Trimble backed him with home runs, both in the third inning.

The no-hitter on senior day capped a remarkable personal story for Powell. He has won 28 games in his career at Southern Miss, but has also undergone Tommy John surgery on his elbow twice.

“That whole process is hard. Tommy John rehab takes a year. Going through it twice, that second time it happened, my freshman year here, it’s taught me that it’s never going to be smooth sailing,” Powell said. “If you want to continue to play this game you’ve got to learn how to deal with adversity. That encapsulates me very well. I’ve dealt with a lot of adversity, from mental health stuff to injuries on the field. A lot of times the setbacks aren’t always baseball-related. During my time at Southern Miss I’ve grown a lot mentally, and the Tommy John rehab helped me build up my strength as a person.”

Ethridge (6-1), meanwhile, carved through the Blue Raider lineup in game two of the doubleheader. He allowed just three hits and no walks, with six strikeouts.

The right-hander retired the first seven batters he faced and pitched around a leadoff double in the fifth for his only trouble. Of his 67 pitches, 51 were strikes.

Blake Johnson and Christopher Sargent each drove in three runs for the Golden Eagles.

The two shutouts Saturday followed a 2-1, 10-inning victory by the Golden Eagles (32-15, 18-7 Conference USA) in Friday’s series opener. Hunter Stanley had 16 strikeouts in nine scoreless innings in that game.

In the first three games of the series, Southern Miss’ starting pitchers have thrown 23 innings, struck out 34 batters, and allowed one run and six hits. They’ve only walked one batter.

The final game of the series is Sunday at 1 p.m.

“Those guys have been consistent. They obviously haven’t thrown up those kinds of numbers all year, but they’ve been close. They’re up there in the top of the nation,” Southern Miss coach Scott Berry said. “They’re just very competitive, pitch-by-pitch. Guys have responded really well when they get the opportunity to go out there. I think the greatest thing is everybody on our team has the feeling they’re going to win when they’re on the mound. That’s a characteristic that every staff strives to get. Very few have it. But we’re fortunate to have those guys that go out and pound the zone.”

After two years as assistant, Lawrence takes over as WC’s girls soccer coach

When he took over as head coach of Warren Central’s girls’ soccer team in 2018, Greg Head never intended for... read more