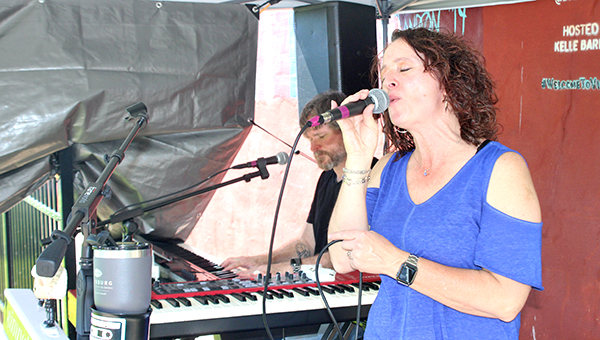 Misty and Jason Fairchild, known collectively as “Sympatico,” perform a song during Second Saturday in downtown Vicksburg. The event, supported by the Vicksburg-Warren Chamber of Commerce, the Main Street Program, downtown merchants and the Vicksburg Convention and Visitors Bureau, attracted residents to shop in downtown shops and eat at local restaurants. (John Surratt/The Vicksburg Post)

Sissy Blanchard of St. Simons Island, Ga., sat at a table in the shade with her cousin, Vicksburg resident Elizabeth Nelson, near the “Welcome to Vicksburg” mural on Washington Street, listening to a tune from Sympatico and handing out roses.

This was Blanchard’s first visit to Mississippi, and Vicksburg, and her first Second Saturday. She said it won’t be her last.

“This is a great setup,” she said. “People can come downtown and have lunch, go shopping; it’s a great idea. Anything that helps small business is a good thing. Vicksburg is absolutely charming and I’m looking forward to coming back.”

The downtown event featured music and a booth sponsored by Lorelei Books where children could make Mother’s Day cards. Shoppers who spent $10 at local stores received a rose for their mother.

Ilse Holderby and her husband Jeff, of Birmingham, Ala., were looking at an item in the window of Peterson’s.

Neeli Watts and her daughter Tatum were looking over some of the items on tables at The Cinnamon Tree.

“We just got here,” Neeli said of the mother-daughter outing, adding Second Saturday, “is a great idea and we’ve got a beautiful day for it.”

Second Saturday began in June 2019. It is supported by the Vicksburg-Warren County Chamber of Commerce, the Vicksburg Main Street Program, downtown merchants and the Vicksburg Convention and Visitors Bureau as a way to attract residents downtown to shop in the stores and eat at restaurants in the area. The program has at times been postponed by weather, and in 2020 was stymied by COVID-19.

The next Second Saturday is scheduled for June 12.

“We’re just trying to get as many people as we can downtown to support the local businesses now that people can get out,” said Nelson, who was the coordinator for Saturday’s event.

“I think more people are feeling confident now that the vaccine’s getting out and a lot of people have already gotten their second vaccines so they’re feeling more comfortable getting out and about and it’s a good last-minute shopping activity for mother’s day,” Nelson added. “People are anxious to get out and have some fun.”