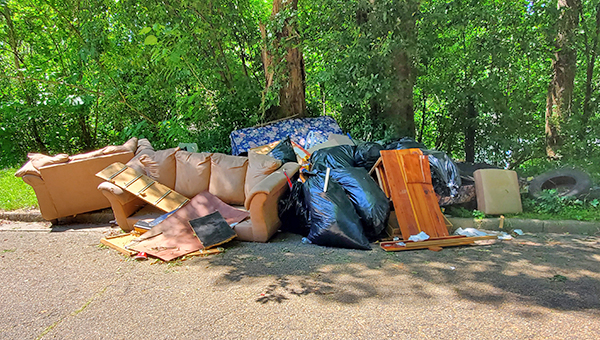 A sofa and other items are collected in an illegal dump on Dewitt Street. Illegal dumps are a problem in the county as well as the city. (John Surratt/The Vicksburg Post)

Sitting on the roadside opposite a vacant house on Dewitt Street is a pile of trash that includes a dilapidated sofa, trash bags, the remnants of a table and other discarded items.

Not far from that pile is the beginning of another pile of debris and other discarded items. The piles are part of what’s becoming an all too common sight in Vicksburg — an illegal dump. Sometimes secluded, sometimes not, these dumps are places people are leaving their unwanted trash.

“This is something we deal with five days a week,” said North Ward Alderman Michael Mayfield, who oversees the city’s public works and community development departments.

“It’s getting out of control,” he said. “And, people are dumping everywhere.”

In the past two months Mayfield’s office has handled more than 1,000 work orders to remove illegal dumps and trash from city streets, and to clear property that people have allowed to become blighted in their neighborhood.

People dump a variety of items ranging from household trash to building materials and used tires.

Tires are especially dangerous, because they serve as a hiding place for rodents and snakes and a breeding ground for mosquitoes. Mayfield said the city recently cleaned two large dump sites on Jefferson Street and First East Street.

Mayfield said people caught dumping illegally receive fines for the violation, but catching people in the act is difficult. Residents who observe illegal dumping are urged to get tag numbers and call police, but few do so.

“We have (mobile) cameras set up in several areas of the city,” he said. “We’re hoping we’ll be able to catch them that way.”

The illegal dumps are only a part of the problem, Mayfield said, adding the city’s litter problem and issues with inoperable vehicles and derelict property are part of the trash problem.

During the citywide cleanup program in April, Mayfield and five other people picked up trash on five blocks of Mission 66.

“We filled four to five bags with trash from the street,” Mayfield said.

He said the city’s community service workers, who as part of their job are responsible for collecting litter, can’t keep up with the trash tossed on the streets.

“If you go on a Saturday or Sunday morning and look from Clay Street to Sky Farm you’ll find trash and debris all over the streets, and the people living there call and complain,” Mayfield said. “And most of the time, we may have two, maybe three, community service workers for the whole city.”

When he talks about trash, Mayfield includes the city’s problem with inoperable cars that sit on curbs and people’s property. Under the city’s ordinances, cars must have a current car tag and be operable. The penalty for a violation is a fine, and the vehicle can be towed at the owner’s expanse.

Any inoperable car on the street is tagged for towing by the police department and, if not moved in five working days, removed. Inoperable cars are tagged by city building inspectors and handled through the Board of Mayor and Aldermen or the city’s Community Court, which hears cases involving building code violations.

Dilapidated buildings and overgrown yards account for much of the city’s trash problems, Mayfield said.

The city routinely sends letters to property owners in violation of the building and sanitation codes, he said, and about 65 percent of the people in violation do not comply with the city’s order to clean up their property. Many of those cases, Mayfield said, end up in Community Court, where the penalty is based on the judge’s discretion and can result in stiff fines.

“It can cost you a lot of money for not complying with an order by a city inspector,” Mayfield said.

“We are seeing non-compliance (with city ordinances) increasing and it’s so unfair to property owners keeping their property,” he added. “Derelict property brings down the value of the neighborhood. People need to take responsibility for maintaining their property and keeping the city clean.

Vicksburg teenager injured in second shooting in city in…