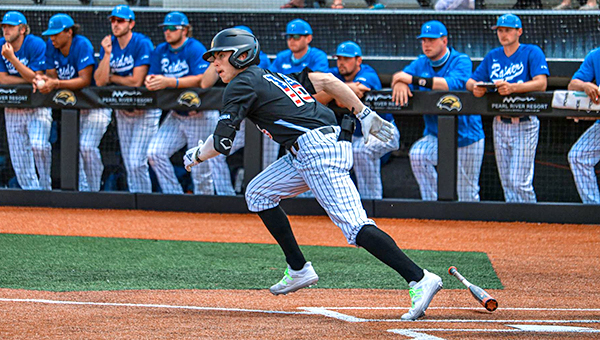 Southern Miss' Reed Trimble breaks out of the batter's box after getting a hit Sunday against Middle Tennessee. Trimble drove in four runs to lead Southern Miss to a 9-5 win and a four-game sweep. (Southern Miss Athletics)

HATTIESBURG — By the time Middle Tennessee started to figure out Southern Miss’ pitching staff, it was far too late to actually do anything with it.

Boyd (4-2) allowed two hits and no walks, and struck out five to cap a dominant weekend by Southern Miss’ pitching staff. The Golden Eagles allowed two runs, two walks and eight hits in the first 32 innings of the four-game series. Middle Tennessee scored four runs in the ninth inning Sunday, after the outcome was largely decided.

“It was definitely the most pressure I’ve felt, having a 3-0 series lead and watching what those guys did for three days straight,” Boyd said. “It was three of the best pitching performances I’ve ever seen. To follow that is an honor. It’s fun to be a part of the staff and watch those guys do what they do.”

Trimble keyed Southern Miss’ offense. He singled in one run in the third inning, then brought in three more with a double in the sixth. Trimble also scored on a wild pitch in the sixth inning to put Southern Miss ahead 9-1.

With the win, Southern Miss (33-15, 20-7 Conference USA) moved into sole possession of first place in C-USA’s West Division with one conference weekend remaining. Louisiana Tech (33-12, 19-7) had the last two games of its series at Florida International rained out on Sunday, and split the first two to fall a half-game behind Southern Miss.

Southern Miss finishes the regular season with a four-game series at Florida Atlantic beginning Friday. Louisiana Tech is home against UTSA, and also has two home games vs. Old Dominion remaining on May 20 and 21. The Conference USA Tournament begins May 26 at Louisiana Tech.

“At the beginning of every year we want to be at the top of Conference USA and go to a regional and beyond. We’re in first in the West — I don’t know what that really means this year — but we just have to take care of business with FAU,” McGillis said.