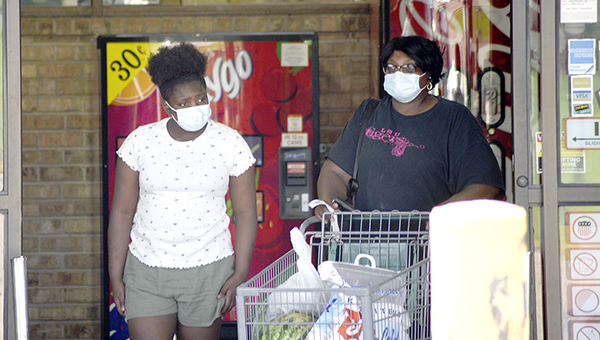 Customers wearing masks walk out of Corner Market after shopping. The city of Vicksburg put a mask mandate in place effective July 18, 2020 while the Warren County Board of Supervisors put a county-wide mask mandate in place effective July 20, 2020. Both mandates required people entering businesses and any public building to wear masks. The county's mask mandate has expired and the city is expected to lift theirs Friday. (Courtland Wells/The Vicksburg Post)

Mayor George Flaggs Jr. said he would lift the remaining restrictions under the city’s COVID-19 emergency order including the mask mandate Friday.

“Everything’s going great,” Flaggs said at the start of Monday’s meeting of the Board of Mayor and Aldermen. “The numbers are down, the vaccinations are increasing slightly and we’re on our way to reopening our city to full capacity.”

The announcement comes one week after the Warren County Board of Supervisors lifted its emergency order.

“We’re going to adopt word-for-word what the county adopted,” Flaggs said, adding after Friday the decision whether to wear a mask will be up to the individual.

The mayor said, however, the city’s special law enforcement task force and the 7:30 p.m. to 7:30 a.m. juvenile curfew will remain in effect for the next two weeks.

Flaggs created the law enforcement task force in July 2020 to fight a spike in crime. It involves an increased police presence and extra patrols under the command of a deputy police chief. The unit works Thursday through Sunday from 7 p.m. to 7 a.m.

Flaggs said he was continuing the task force and the curfew in the wake of two shootings that occurred during the weekend in which a 28-year-old man was shot on Grove Street and a 16-year-old boy was shot on Alcorn Drive in different incidents four hours apart.

The board in March 2020 approved an emergency order out of concern for the virus setting a mask mandate and placing restrictions on businesses operating in the city. Some of the restrictions were eased in April allowing restaurants and bars that serve alcohol on the premises to close at 2 a.m. instead of 1 a.m.