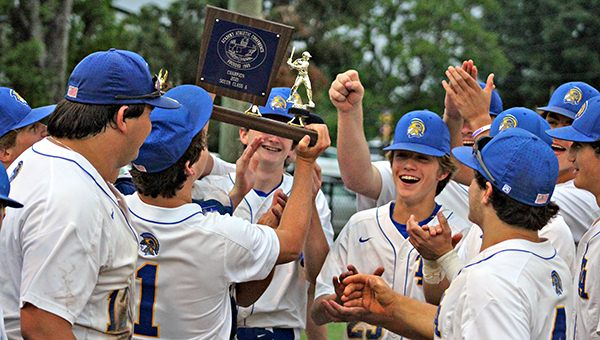 Tallulah Academy baseball players celebrate with the trophy after winning the MAIS Class 1A South State championship on Monday. The Trojans advanced to the Class 1A championship series for the first time in school history, and will face Calhoun Academy beginning Thursday. (Ernest Bowker/The Vicksburg Post)

TALLULAH — In the latter stages of Monday’s game against Prairie View, Tallulah Academy’s baseball players pondered the best way to celebrate what was another increasingly inevitable victory.

Dances and dogpiles were suggested and dismissed as too silly or dangerous. A postgame dinner gained some traction, as did plans for more practice afterward.

In the end, the Trojans settled for something relatively simple — some hugs and high-fives, followed by pictures — for a win their community has waited half a century for.

Tallulah Academy, which opened in 1970, clinched its first-ever trip to a baseball state championship series. It will face Calhoun Academy in a best-of-three series beginning Thursday. Game 1 will be at Calhoun, and Games 2 and 3 will be Saturday in Tallulah. Game times have not yet been set.

“It’s awesome, especially after four years of losing in the semifinals it’s awesome to finally get there,” said Tallulah pitcher Marsh Wood, who allowed two runs in three innings Monday. “It’s crazy. There’s one word for it — crazy. It’s been a fun ride.”

The Trojans (24-1) reached the Class 1A semifinals in 2018 and 2019, and had the 2020 season cut short by the COVID-19 pandemic. The 2021 squad has not lost since Feb. 26 against Class 4A finalist Riverfield Academy in a tournament game shortened to five innings by a time limit. They said that loss was what convinced them this might be their year.

Nearly half of Tallulah’s wins this season have been by run rule, and five came against District 4-1A rival Prairie View. The Trojans beat Prairie View three times in the regular season and twice in the playoffs.

After taking Game 1 of the Class 1A semifinal series 7-0 last Thursday, the Trojans returned to their home field to close it out. They only managed to collect seven hits, but scored in each of the first five innings to steadily build an insurmountable 11-2 lead heading into the final inning.

Prairie View committed three errors — two of them on catcher pickoff throws to first and third that either led to runs or directly allowed one to score — and its pitchers walked nine batters. Etheridge scored the first run of the game on a balk with two outs in the first inning.

After Prairie View tied it in the second inning, Sullivan hit a two-run triple and Etheridge brought him home with a sacrifice fly to put Tallulah ahead for good, 4-1.

“Our pitching was very good today. Our bats weren’t all there. Even though it might show it on the scoreboard, we didn’t hit like we can. We’ve got to improve that for next week,” said Tallulah catcher Kayne Romero, who went 1-for-3 with one RBI.

Prairie View did score three times in the top of the seventh, with the help of two walks and a throwing error that allowed a run to score, but the outcome was never in doubt. Paul Michael Machen struck out Layton Philley looking to end the game, let out a long yell and hugged his catcher Romero, and the relatively subdued celebration was on.

“This is our 50th year anniversary as a school, and it’s the first time the baseball team has been in the championship. And we’re going to win it for our 50th anniversary,” Romero said.