Gators geared up for spring jamboree 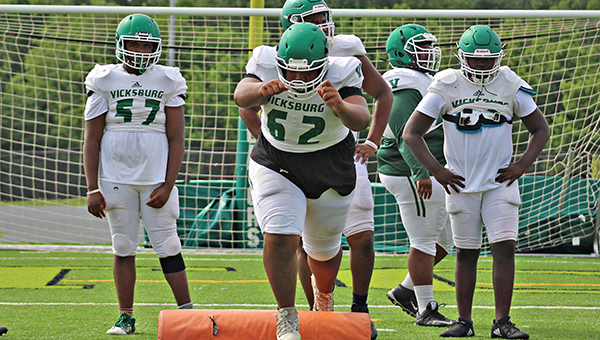 Not long after he was hired in late February 2020, the COVID-19 pandemic and its accompanying shutdowns began. It wiped out the entire spring practice period, as well as a few weeks of summer workouts. By the time the Gators began the season, McDaniel admits he wasn’t just learning what his players could do, he was still learning most of their names.

“You can’t build a program in a month and a half. It just doesn’t work that way,” McDaniel said.

This winter and spring, McDaniel finally has had the chance to start building his vision of what Vicksburg High football can be. He’s had all winter to work with his players in the weight room, and 15 practices over the past three weeks to see what they can do on the field.

They’ll hit the first checkpoint of the offseason Thursday, when they host Wingfield and Port Gibson in a spring jamboree at Memorial Stadium starting at 5 p.m.

Vicksburg and Wingfield will play the opening game, followed by Wingfield vs. Port Gibson and then Vicksburg vs. Port Gibson. Each game will be a two-quarter controlled scrimmage with no special teams plays, and should last about an hour apiece.

McDaniel said that while the coaches have evaluated players, and several position battles are ongoing, the biggest focus of the spring has been on building teamwork and relationships between teammates, players and coaches.

It’s a process that takes time, which is something no one had in 2020.

“It helps out a whole lot, just being able to get yourself familiar with all the kids. Actually just being able to learn their names and their personalities,” McDaniel said of having a full offseason. “When we first got here we didn’t know what they could do athletically, so we tried to build a program and take off running. It definitely helps being able to be around the kids, in the weight room, being able to sit down and talk with them, and getting an opportunity to build a relationship with every kid.”

That’s a little easier to do at the moment, since there are only 48 players currently on the roster. Six of those are seniors. Vicksburg started as many nine freshmen last season, so there are some experienced players returning, but McDaniel admitted he’d like to pump up the numbers a bit.

“A kid asked if we were going to have a JV season. Our JV is our high school,” McDaniel said. “We have a host of 10th-graders that are going to be starting for the varsity. Our ninth-graders are coming over and we have 16 or 17 of those and will get the numbers up, hopefully. When this COVID stuff blows away we ought to be able to get up to about 35 or 40. It’s just a work in progress.”

The spring game is roughly the midpoint of the Gators’ offseason program. They’ll throttle back for a couple of weeks afterward as school ends, with voluntary weightlifting and conditioning sessions, and then resume full workouts on June 1.

“Right now, we’re putting together the building blocks for our program,” McDaniel said. “The kids are very receptive. They look like they’ve got a grasp of it. But it’s also that camaraderie with the coaching staff and the kids, and they know you and you know them.”

Coming out of the spring game, McDaniel added that he was looking for his players to continue that theme of teamwork, perhaps even more than outstanding individual performances.