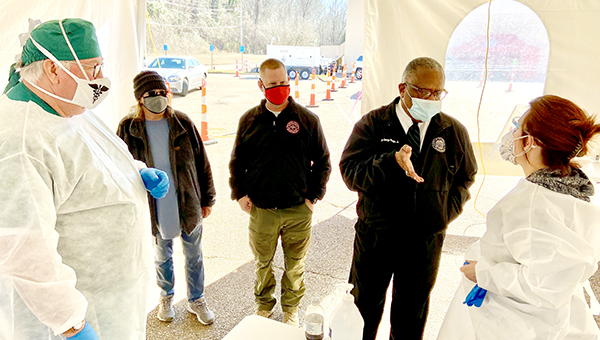 During their work session Monday, the Warren County Board of Supervisors received an update on the drive-thru COVID-19 vaccination site at Uptown Vicksburg, formerly the Vicksburg Mall.

Warren County Emergency Management Agency director John Elfer said well over 17,000 shots in arms have been given at the mall, but the number of people lining up to get vaccinated is beginning to decrease.

“This is for several different reasons, I think, so on or about the 24th of this month, we will go to one day. We will go to Wednesdays and then we will see how that carries us into June,” Elfer said.

Many of the volunteers, who Elfer said are “graciously giving of their time and have done a great job,” want to work.

“The volunteers want to work and put shots in arms,” he said, not stand around idle.

The Vicksburg drive-through site, which is managed by the Mississippi State Department of Health, has operated in the back parking lot of Uptown Vicksburg since the beginning of February.

Initially, 400 doses of the vaccine were administered three days each week. By March, the site was administering as many as 800 doses each Monday, Wednesday and Friday.

When the Vicksburg site was set up it was the first hybrid site established in the state. Since then, officials said, it served as a model for the rest of the state.