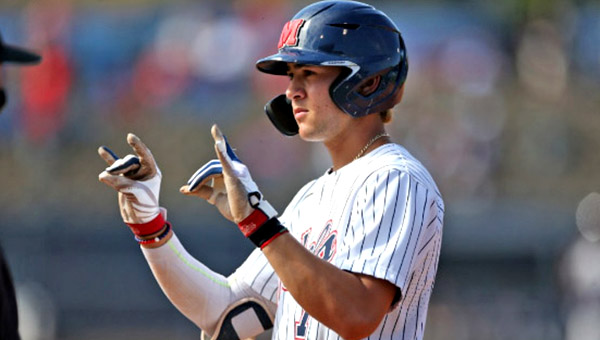 Ole Miss’ Jacob Gonzalez signals to the dugout after getting a hit Wednesday against Little Rock. Gonzalez went 4-for-5 and hit a three-run home run to lead the Rebels to a 9-4 victory. (Joshua McCoy/Ole Miss Athletics)

OXFORD — Ole Miss’ middle infielders did plenty of damage at the plate, its pitchers did their share on the mound, and the Rebels racked up another midweek win Wednesday.

Gonzalez had a career-high four hits, including a three-run home run in the seventh inning that effectively put the game away.

Chatagnier drove in three runs with a double in the second inning, and scored on a single by Kevin Graham to give the Rebels an early 4-0 lead they never relinquished. It was Chatagnier’s only hit of the game.

Justin Bench also had two hits and scored two runs for Ole Miss (34-14), which improved to 11-1 in midweek games this season. It has won 11 straight in that category — including two gainst Little Rock (19-24) — since losing to Louisiana Tech on March 16.

The Rebels have one more midweek game on the schedule, next Tuesday at home against Tennessee-Martin.

Seven Ole Miss pitchers, meanwhile, combined for 19 strikeouts and only one walk. Starter Josh Mallitz had six in two innings, and Tyler Myers, Wes Burton and Braden Forsyth had three each.

Austin Miller (1-1), the second pitcher used, had two strikeouts in his one inning of work and was credited with the win.

Wednesday’s win served as a nice tuneup for a much bigger challenge this weekend. The Rebels will host No. 2 Vanderbilt in a three-game Southeastern Conference series beginning Friday at 6 p.m.

Friday’s game and Sunday’s finale will both be televised on the SEC Network. Sunday’s game begins at 2 p.m., and Saturday’s middle game at 4 p.m.

Gators geared up for spring jamboree

Todd McDaniel’s first offseason as Vicksburg High’s football coach was a bit disjointed. Not long after he was hired in... read more