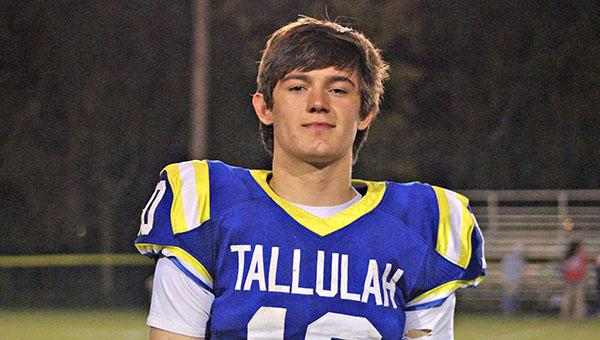 Tallulah Academy’s Dee Morgan went 2-for-3 with two doubles and two RBIs in a 5-2 win over Calhoun Academy in Game 1 of the MAIS Class 1A baseball championship series on Thursday.

Tallulah rallies to take Game 1 of Class 1A championship series

For one of the few times in the past the past three months, Tallulah Academy looked beatable on the baseball field.

That’s not really who they are, though, at least not this season.

Dee Morgan hit a go-ahead, two-run double in the top of the sixth inning, and Paul Michael Machen homered in the seventh to add an insurance run as Tallulah Academy came from behind to beat Calhoun Academy 5-2 in Game 1 of the MAIS Class 1A championship series on Thursday.

Games 2 and 3 are Saturday at 2 p.m. at the Richmond Sports Complex in Tallulah. The Trojans only need to win one of them to claim the first baseball state championship in the school’s 50-year history, and winning is something they’ve done almost every time out this season.

Thursday’s victory ran the Trojans’ (25-1) winning streak to 24 consecutive games, although it was much more difficult than they’ve become accustomed to.

Haze Vanlandingham hit an RBI single and another run scored on an error to give Calhoun Academy (19-5) a 2-0 lead in the third inning. At the same time, Tallulah was struggling to find its groove offensively. It had a runner picked off of third base to end a bases-loaded threat in the second inning, and stranded eight runners through four scoreless innings.

The Trojans finally got one run across on a fielder’s choice in the fifth inning, then shifted into gear in the sixth. Machen led off with a double and scored the tying run on a sacrifice fly by Walker Sullivan.

A single by Jacob Martin, a hit batter and a walk loaded the bases, and Morgan’s double to left field brought two of them in to give Tallulah a 4-2 lead. Machen’s home run with one out in the seventh made it 5-2. Calhoun went down in order in the bottom of the seventh to finish the game.

Morgan finished 2-for-3 with two doubles and two RBIs for Tallulah, while Machen went 2-for-3 and scored two runs. Machen also came on in relief in the bottom of the seventh to get the final out.

STARKVILLE — Mississippi’s college football fans will once again get to enjoy a little egg with their turkey. The Southeastern... read more