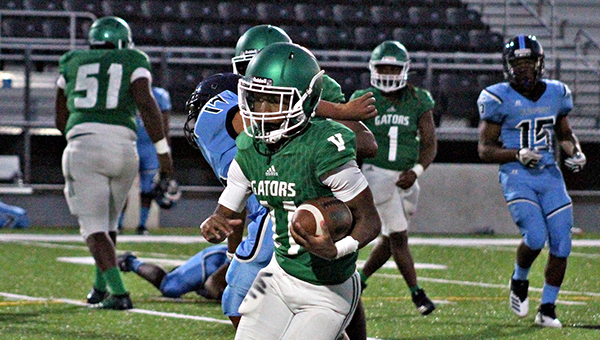 After two long years of construction and waiting, Vicksburg High finally got a chance to enjoy its renovated stadium on Thursday night.

The same could be said about the team on the field.

Collin Johnson and Otis James scored three touchdowns apiece, a dominant defense allowed only one touchdown, and Vicksburg routed Wingfield 20-0 and Port Gibson 30-8 in a pair of spring jamboree games at Memorial Stadium.

Between the young team on the field — nearly a dozen sophomores, including Johnson and James, started — the atmosphere and the result, the jamboree provided what coach Todd McDaniel hopes is a small glimpse of things to come.

“A great day. We have a team full of ninth-graders. Both our running backs, our quarterback, are ninth-graders going into 10th grade,” McDaniel said. “It’s important for us to get some success. We haven’t had success in a long time around here. It’s important for us to understand that the coaches have been preaching to get in the weight room, do the little things right, and when you come out here you start to see some of those results.”

The stands were packed at Memorial Stadium, which was not able to be used at all for football in 2020 while it underwent major renovations. The brand new chairback seats were not used but all of the fans sat in the old concrete stands, illuminated by the warm glow of a giant video board that replayed a lot of highlights by the home team.

After shutting out Wingfield 20-0 in the first game of the tripleheader — and after Port Gibson beat Wingfield 6-0 in the second — the Gators turned their attention to Port Gibson in the finale. They racked up 211 rushing yards in only two quarters against the Blue Wave, and had 10 of their 26 plays go for 10 yards or more.

Johnson scored on runs of 1 and 13 yards and finished with 132 rushing yards on a team-high nine carries. James cashed in on a pair of short runs after long plays — including a 50-yard run by Johnson — put the Gators near the goal line.

Vicksburg only threw one pass, a 39-yard completion from Ronnie Alexander to Malik Montgomery that set up Johnson’s first touchdown.

Port Gibson’s touchdown came on a 77-yard pass from Robinson to Jukwon Frye in the second quarter.

“We moved fast. We moved faster than we moved all last year. I was happy to see them being aggressive and running to the football,” McDaniel said.

All in all, McDaniel said, the dominant spring game performance was a great way to go into the second half of the offseason program. The Gators will take a couple of weeks off and resume full workouts on June 1.

The season opener is Aug. 27, at home against Germantown in the Red Carpet Bowl.

“My staff has done a tremendous job this spring. I have some guys on my staff that want to win just as bad as I do. Coach Lacey, Coach Bennett, Coach Brown, Coach Archer, Coach Johnson, Coach King … I hope I didn’t miss anybody. Those guys want to win, and a lot of them are natural Gators,” McDaniel said. “We want to make this one of the best football programs in the state and I think we made a step in the right direction.”

Tallulah rallies to take Game 1 of Class 1A championship series

For one of the few times in the past the past three months, Tallulah Academy looked beatable on the baseball... read more