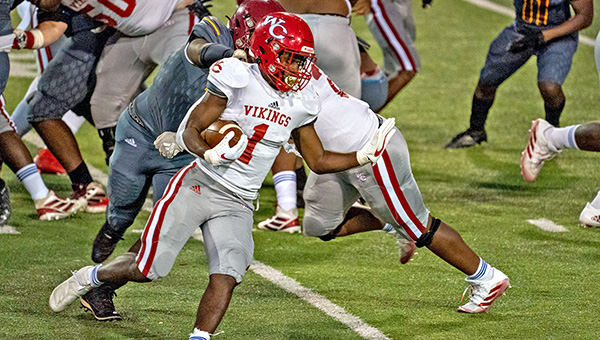 Warren Central’s spring football game, like all spring games, was more about the process than the final outcome. Fortunately, the Vikings were able to walk away feeling good about both.

Tre Hall scored on a 28-yard touchdown run, and Warren Central settled in after some early missteps to beat Laurel 7-6 in their spring game Friday at Southern Miss’ M.M. Roberts Stadium.

WC head coach Josh Morgan said winning the spring game against a quality opponent like Laurel would give his team a big boost heading into the next phase of the offseason program. The Vikings will take a couple of weeks off before beginning summer workouts on June 7.

“Yes, it’s spring, but we wanted to win and we want to know how to compete and to treat it like a game. The good thing was, when it was time to win we found a way to win and pull it off. I was very pleased to see that,” Morgan said. “I feel like we’ve had a really good offseason, a really good spring, and now you’re able to finish on a positive note. You keep building momentum and keep going to work. We’ll use that time wisely and get ourselves in the best possible shape we can be in, and fix the things that are going to need fixing, and keep coaching.”

Warren Central committed two early turnovers Friday — Laurel cashed in one for a first-quarter touchdown — and had an 80-yard touchdown run by Hall wiped out by a holding penalty.

The second quarter was mostly a stalemate, and the Vikings finally took control in the third and final quarter. That was when Hall scored his touchdown to give the Vikings the win.

“We definitely could have done some things better offensively. Of course, that’s spring ball,” Morgan said. “We had a couple things that killed some drives, but we were extremely close to being sharp. You know how offense is, where one thing goes sideways and messes things up. Overall, we were pleased.”

Morgan might have been even happier with his defense. The Vikings are replacing eight starters, mostly on the defensive line and in the secondary, but only gave up one touchdown after a turnover gave Laurel a short field.

“We’re replacing eight starters. I didn’t realize that until somebody pointed it out to me,” Morgan said. “We got better as the game went on, is a good way to put it. I thought they settled down and tackled well for spring. There’s a lot of room for improvement, but at least we know what to improve on.”

The game was the last of four scheduled in a jamboree Friday at Southern Miss, and was played with a 90-minute time limit. The Vikings and Tornadoes squeezed three full varsity quarters into that span, as well as 20 plays with the junior varsity.

Along with the big-game feel of playing in a Division I college stadium, Morgan said he and his coaching staff got everything they’d hoped for from the game.

“We played a bunch of guys, got valuable experience, came out with no major injuries and just really put a good stamp on a very productive and high-energy spring. We got everything out of it that we wanted to,” Morgan said. “That experience was what we were all about. I know our guys benefited from it.”