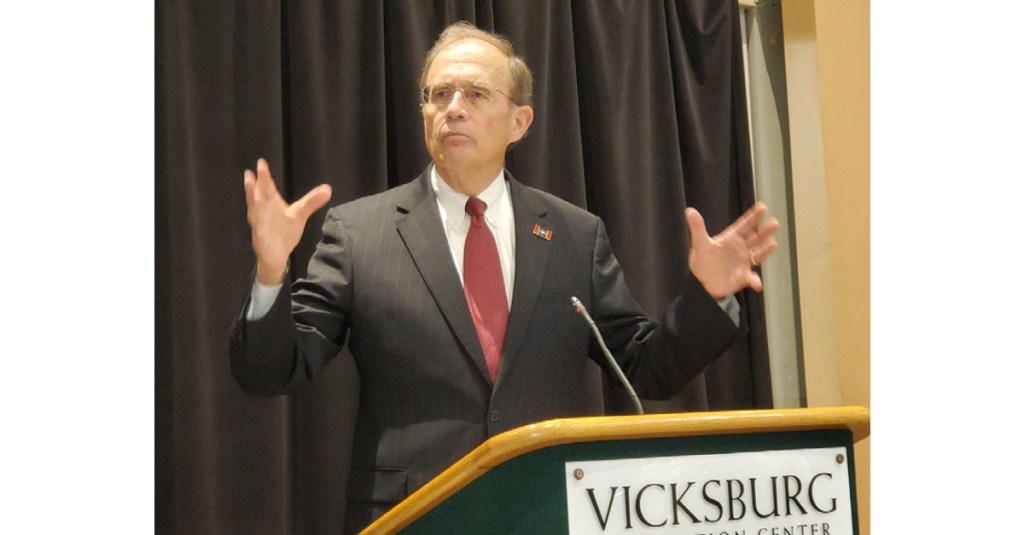 Mississippi Lieutenant Governor Delbert Hosemann addresses members of the Vicksburg-Warren Chamber of Commerce at their monthly lunch meeting on May 19, 2021. (Photo by John Surratt)

Bills affecting technology, workforce training, and health care — with some side trips to deal with COVID-19 issues — were among the highlights of Mississippi’s Legislature during its 2020 and 2021 sessions, Lt. Gov. Delbert Hosemann said Wednesday.

Speaking to members of the Vicksburg-Warren Chamber of Commerce at their monthly lunch meeting, Hosemann discussed the Legislature’s activities during its past two sessions, with a glimpse of future issues facing the state.

“Our small businesses were struggling, our restaurant industry was collapsing,” he said. “When you look at the $300 million, only about $200 million of that was used by small business in Mississippi. About another $100 million was moved to the unemployment compensation fund so small businesses would not have to raise their tax rate.”

He said the Legislature also provided $10 million to increase intensive care unit beds and negative pressure room capacity at hospitals across the state.

The move, he said, “Literally saved lives. We were running about a 10 percent to 11 percent hospitalization rate on COVID patients and we were running about 27-28 percent mortality rate. I will tell you those rates would have been worse had we not made the decisions.”

Looking at technology, Hosemann said the Legislature allocated $200 million to equip students in grades K-12 with laptop computers or tablets to assist with distance learning and increase connections between schools and homes across the state.

“We made sure every child in Mississippi had an iPad or a Chromebook; every single one,” he said. “It was one of the smart things the Legislature did. We ended up being one of the most, or the most advanced state on a number of different issues; that’s one of them.”

Besides the investment in computers and tablets for students, Hosemann said, the Legislature allocated $75 million to expand broadband service in Rural Mississippi, which he said is a $150 million investment for the state.

He said another $166 million has been allocated for the program in 2021, which will allow energy companies to lease space to Internet companies for increased access to high-speed Internet service.

“We wanted to make sure those kids with computers didn’t have to go to a hot spot; you want to open the world to them. You open it with broadband,” he said.

Hosemann said a recent study showed there is 52 percent participation in broadband service, adding, “For every house we’re running this cable in front of, four-and-a-half of the people are signing up. They realize the value of that broadband.”

Hosemann said the Workforce Development Investment Board which develops and implements a strategy to develop the state’s education, training, and employment service resources in support of economic development was reorganized and a workforce czar hired to address the state’s needs and those of growing businesses.

One of those members, Hosemann said, is Pablo Diaz, president and CEO of the Vicksburg Warren Economic Development Partnership, “So again, Warren County is at the epicenter of technical training for the future of Mississippi.”

The workforce czar, he said, will receive information on workforce training programs at the state’s community colleges and universities.

The goal, Hosemann said, is to ensure “people are being trained for something that will get a good job; not just be trained.”

He said the state needs to ensure the schools have the proper equipment to train students for technical jobs and once the workforce is trained be prepared to offer the economic incentives to attract business.

During the 2021 session, Hosemann said the Legislature approved income tax deductions for Mississippi Back to Business, rental assistance and other relief programs if those expenses are deductible for federal tax purposes.

Teacher and teacher assistant pay was increased and Hosemann said there is a move to continue teacher raises on “a sustainable normal function for pay raises” annually.

Hosemann said the Legislature will need to re-evaluate the state’s health care programs.

“We have coverage for people who do not have the income,” he said. “It’s time for us to start looking at people who are working who can’t afford health care; that’s not fair. We need to find some kind of health care for them.”

Hosemann would not say if the healthcare plan might include Medicaid expansion, adding, “That is going to be part of the discussion and we need that. It’s time. Everything is on the table.”

Health care will be one of several items the Legislature will address in the future, Hosemann said. Another will be the use of American Rescue Plan Funds, a federal stimulus plan for state and local government.

“We have got a huge amount of money that has been given to us,” he said. “This is not about one year or two years; this is about one generation or two generations. This is where we’re going.

“There will be a lot of opportunities for the short term but we’re not going to do that. We’re going to take the time to do something our grandchildren will be proud of.”

He said the state will also benefit from a federal infrastructure bill. “Never has our city had this kind of opportunity and our senators and your leadership are going to be very careful to spend it well.”

Fire scare at The Vicksburg Apartments caused by washing…