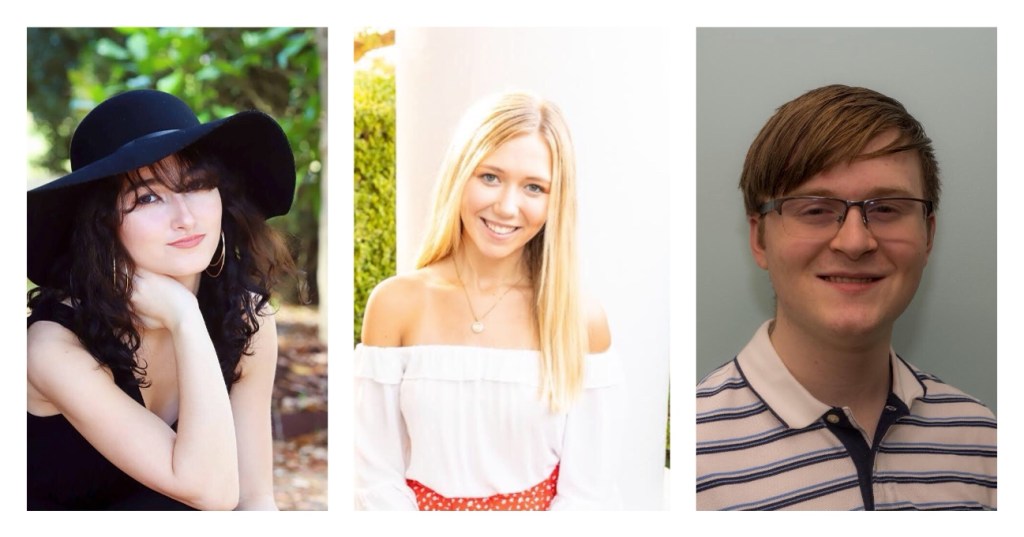 School settings across the country were altered this year due to COVID-19.

Some students were relegated to remote learning, while others, who attended in-person classes, did so by following the guidelines set by the Center For Disease Control.

However, in the midst of all the challenges set off by the pandemic, three local high school seniors achieved the honor of being named a STAR student.

Those students from the class of 2021 are: Brianna Poole from Porters Chapel Academy, Benjamin Talbot from Warren Central High School and Logan Young from St. Aloysius High School.

Sponsored by the Mississippi Economic Council’s M.B. Swayze Foundation, the STAR program recognizes the senior in each graduating class with the highest ACT. To be eligible, students must score at least a 25 on the ACT and hold a cumulative average of 93 in core classes through the first semester of their senior year.

“When I found out I was STAR Student, I was really excited and surprised,” Poole said. “Becoming a STAR student never really occurred to me since I really didn’t expect to get a high score on the ACT.”

Poole, who has a 4.0 GPA, said she took the ACT three times and her highest score was a 30.

“Brianna has a very bright future. She works very hard and takes real joy in learning,” Amanda Tolbert, whom Poole chose as her STAR teacher, said.

Tolbert said this is her first time to be selected as a STAR teacher.

“I got a little teary-eyed when Brianna told me. It means so much to be recognized by a student,” she said.

Tolbert taught Poole English in the 9th, 10th and 11th grades. She said she chose her because of her teaching skills and her compassion for others.

“I chose (Tolbert) as my STAR teacher because she is one of the most caring people ever,” Poole said. “She really loves her students and wants the best for them.  She is also a really great English teacher and a very strong woman, in my opinion.”

Poole is a member of the student council, Key Club and the National Honor Society, and she served as the president of the senior class.

She plans to attend Louisiana Tech University in the fall to study biomedical engineering.

There was no question that Talbot would be named as a STAR student — he received a 35 on his ACT.

“I was glad to be named STAR student. Anyone who gets a 35 is automatically a STAR student, even if there’s more than one, so I more or less expected it,” he said. “Being STAR student wasn’t my main goal going into high school. I wanted to get the best ACT score I could, and if that meant STAR student for me, all the better.”

Talbot, who has an unweighted 4.0 GPA, said he took the ACT four times, once in 7th grade, as part of Duke University’s Talent Identification Program (TIP), and then again in the 10th, 11th and 12th grades.

“Ben has the potential to be a leader, as he was the president in Mu Alpha Theta this year. He managed the club members, service hours, agendas, and meetings among all of the other things thrown at him,” Terry Wong, whom Talbot chose as his STAR teacher, said. “Ben has also maintained advanced placement, college level, and honors classes while participating in band and choir and staying grounded in his faith.”

This is Wong’s seventh time to be selected as a STAR teacher.

“When Ben came and talked with me, I told him that I was honored that he felt that our relationship over the past several years with musicals, Mu Alpha Theta, National Honor Society, Algebra III and other classes and functions kept me in contention,” Wong said. “He is a special young man with great potential and I feel privileged to have walked with him on his path and cannot wait to see what the future holds for him.”

It is from the various classes and activities that both the teacher and student were involved in that Talbot said he chose Wong as his STAR teacher.

“Mr. Wong taught me Algebra III. He didn’t just teach me math though; he taught me to be diligent in my work and to make sure I remembered to do each step properly. Thanks to him, I am better at making sure I do all I am supposed to,” Talbot said. “Also, as a director/manager of the musical’s set crew, he guided me to be a better problem solver, handyman and creative thinker by letting me take responsibility and contribute my ideas to the shows. Mr. Wong always pushed me to be a better, more well-rounded, and experienced version of myself in education, on the ACT test, and in life.”

Talbot served as the president of the Mu Alpha Theta and robotics club. He was a member of both the band and choir for most of his high school years, and he helped run the high school’s musical for four years.

He has been accepted to Brigham Young University and plans to study mathematics and science.

“I felt honored when I heard that I had been named STAR Student,” Young said. “While recognition should never be the leading factor in striving for your goals, it is an amazing feeling to have your hard work recognized, especially when I know so many others who deserve just the same.”

Young, who took the ACT five times and has a composite score of 31 with a 32 super score and a 4.52 GPA, said, “I never really set forth in my academics with a specific title or goal in mind. I just always strived to do my best and if I was doing my best, then I was successful.”

“Logan is one of those rare students who has the perfect combination of curiosity, love of learning, and a talent for critical thinking,” Dawn Meeks, whom Young chose as her STAR teacher, said. “I have taught her for three of her four high school years. Watching her grow academically has been such a privilege and an extreme pleasure.

“More importantly, Logan has also continued to grow into a fantastic young woman with a caring worldview who will definitely be a person of consequence in our society. I am very grateful to have gotten the chance to play a small role in her life and humbled that she chose me as her STAR teacher.”

Meeks is the head of the science department at St. Al and teaches biology, AP biology, and anatomy and physiology.

“Ever since elementary school, I’ve always been curious and eager to learn but science was difficult for me to understand. Because of this, I never enjoyed science. It wasn’t until I had Ms. Meeks as a teacher that I really developed a love for science,” Young said. “I was able to understand what I was being taught and overcome the feeling of doubt that had repressed my curiosity and love for science in the beginning.”

“It is always a surprise to me to be selected, but this year felt extraordinary perhaps because of the struggle to maintain a sense of normalcy during a pandemic,” Meeks said. “Teaching and learning outside the classroom last year made me realize how fortunate I am to be able to teach in person and to have conscientious students like Logan who overcame those challenges in such a spectacular way.”

Young was the vice president of the National Honor Society, secretary of Mu Alpha Theta, was a member of the Quiz Bowl team all four years of high school and competed as a part of the Math and Science Team her junior year. She was a member of the Mentoring Team, Varsity Flashes Tennis Team, and Vicksburg Cotillion Club and is a past member of the Key Club, Interact Club and Chick-fil-a Leader Academy.