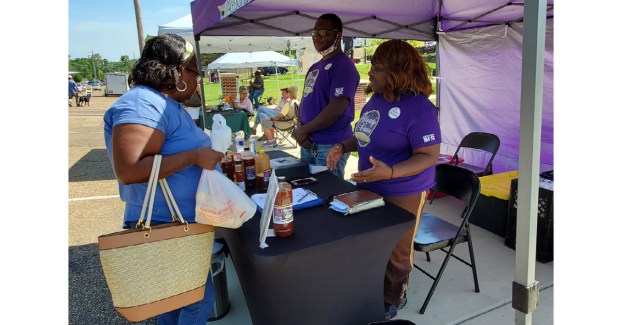 They were signs of the season, Vicksburg’s mask mandate was lifted, the weather was sunny and warm and the Vicksburg Farmers’ Market was back in business on Washington Street between Grove and Jackson streets.

Shoppers looking for a good deal on vegetables or their favorite jams walked among the booths lining both sides of Washington Street as the sounds of live music drifted through the air.

Vegetables weren’t the only items available at the market. Shoppers were able to get drinks and snow cones, shop for birdhouses and get a taste of Already Dunn Sauce, an all-purpose sauce for cooking that vendor Ida Billingslea said had multiple uses.

“Everything you need is in one bottle,” she said. “The only thing it’s not good on is ice cream.”

Billingslea said she has been coming to the market for about two years. Business, she said, was good.
“Not where I expected to be, but good,” Billingslea said.

Another vendor having a good day was Callie Chappell of Clinton, owner of Callie’s Tasty Treats, who with her mother-in-law Jen Chappell was selling cookies, cakes and other sweet treats.

“I’m almost sold out. I may have to call it a day,” she said about 10 a.m. “This is my first time here. I learned about the market from a friend. This was a surprise; I didn’t think it would go this good, I plan to be back next week.”

Not far from Chappell, Kate Montgomery of Kate’s Jams and Jellies stood behind a table and shelves stocked with salsa, pickles, fig preserves and other assorted jams and jellies and watched two potential customers sample some of her pickles.

“Business has been great,” Montgomery said. “I’ve been coming here since 2008, so people know my stuff; they know what I have.”

“We’re doing fine,” he said, adding he has been a fixture at the market for several years.

One of his customers was a first-timer to the market.

Cameron Alred said he was moving to Vicksburg from Tulsa, Okla., to take an internship in the IT division of the U.S. Army Engineer Research and Development Center.

“I was able to find an apartment and they’re (his family) helping me move in,” he said.

Near Jackson Street, members of the Boyd family, a longtime participant at the Farmers’ Market, were selling vegetables and beef to customers who lined up at their booth.

“We’ve been coming here for 12 years,” Elijah Boyd said. He said the family has been selling beef at their booth for two years, adding business had been good.

At the opposite end of Washington Street, Kristen Sims with TASC Farms from Edwards was completing a sale to Bennie Wooten.

“Business has been good,” Sims said.

“It’s been steady,” said Stacey Vaughn, one of Sims’ co-workers. She said TASC Farms has been at the market for three years.

“All their stuff is good,” Wooten said.