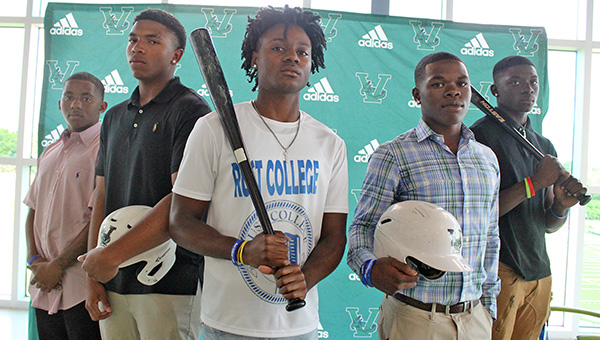 When a team hasn’t played in a while, it’s usually a bad thing to show some rust. On Monday morning, Vicksburg High’s baseball players were proud to do it.

“We’re excited for them. Those guys worked hard and they did everything we asked them to do, and because of that they have a reward by being offered a scholarship to play college baseball,” Vicksburg coach Antonio Calvin said.

Rust is a historically black college and NAIA member located in Holly Springs. The five Gators recently attended a group tryout there, and Rust coach Stanley Stubbs liked enough of what he saw to bring them all in as part of the 2021 signing class.

“That’s the best thing about it. We’re all familiar with each other, we’ll all be roommates, we’ve all got chemistry with each other,” said Kelly, who hit .371 with 10 RBIs this season.

Bershell, an infielder who hit .308 this season, said he was as happy to sign with Rust to get and education as he was to play baseball.

“It’s a nice day. I’m happy to sign. I didn’t want my mama to pay for school, so I had to do this,” Bershell said. “I wanted to go to college and I wanted to play baseball. I love it. I’m glad he gave us a chance to do it.”

The signing day ceremony at Vicksburg High was indeed a celebration of both accomplishment and promise for the future. All five players indicated that academics were as big a motivator for choosing Rust as its baseball program.

“Good college. We’re trying to be successful young men in the future besides baseball,” Kelly said. “If baseball doesn’t work, I’ve still got a good future ahead of me going to Rust. It’s a good opportunity.”

Calvin said selling the marriage of baseball and academics was not a coincidence. He said Rust has a unique arrangement with Ole Miss that provides a good path to a master’s degree during their playing careers.

“Not everybody is promised to be a draft pick or to play independent ball, or anything like that. So for us, No. 1 priority is to get a sound education,” Calvin said. “They have a really good partnership with Ole Miss where you can go three years at Rust and two years at Ole Miss and get a master’s degree. For us, that really factored in to choosing Rust.”

And, at the end of the day, the chance to continue playing baseball also factored in. The fact that it’s a chance not everyone gets was not lost on the signees.

“It’s just a blessing, because a lot of people don’t get the opportunity to go play college ball. You can’t take anything for granted,” Brown said.