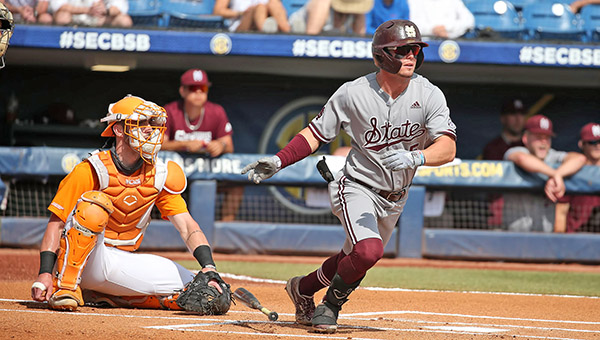 Mississippi State's Tanner Allen connects for an RBI single in an SEC Tournament game against Tennessee on Thursday. Mississippi State lost the game 12-2 and was eliminated from the tournament. (Michael Wade/Southeastern Conference)

HOOVER, Ala. — Mississippi State had a short and ugly stay in Hoover.

Jordan Beck and Pete Derkay each had a home run among Tennessee’s 15 hits, and the top-seeded Volunteers blasted Mississippi State 12-2 in an elimination game at the Southeastern Conference baseball tournament on Thursday.

Tennessee advanced to face either Florida or Alabama in another elimination game Friday.
Mississippi State (40-15), ranked third in the country, went 0-2 in the tournament and was outscored 25-3 by Florida and Tennessee (43-15). The Bulldogs were run-ruled in both games.

“I didn’t think we played really tough all week. Didn’t like our body language, didn’t like the way we went about our business,” Mississippi State coach Chris Lemonis said.

Tennessee dominated Mississippi State almost from the outset. After a scoreless first inning, Derkay’s three-run home run and an RBI single by Liam Spence gave the Volunteers a 4-0 lead in the second.

Beck hit a solo home run in the fourth, and the Vols added three runs in the fifth and one more in the sixth to push the lead to 8-1.

An RBI single by Drew Gilbert capped a five-run rally in the eighth inning and ended the game via the mercy rule. Mississippi State closer Landon Sims, who had a 1.45 ERA entering the game, allowed four runs and five hits in one-third of an inning.

Six Tennessee players had at least two hits apiece. Spence was 3-for-4 with two RBIs and two runs scored, Max Ferguson had three hits and three RBIs, and Derkay was 2-for-4 with three RBIs.

“It’s just kind of how the cookie crumbles sometimes. It’s baseball. Sometimes you hit the ball well, and it gets caught. Sometimes you hit a ball off the end of the bat and it drops and you get a double out of it,” Derkay said. “We just try to keep putting good swings on the ball. Today they found the holes and put together a lot of really good at-bats to score a lot of runs.”

Mississippi State’s runs came on an RBI single by Tanner Allen in the third inning, and a run-scoring fielder’s choice by Kamren James in the top of the eighth.

Mississippi State was announced earlier this month as one of 20 teams vying to be among the 16 regional host sites in the NCAA Tournament. Those sites will be announced Sunday — the entire 64-team bracket will be revealed Monday — and the Bulldogs will have to wait and see if their dismal SEC Tournament performance hurt their seeding for the big dance.

“Obviously, we got (beat) two games, so it’s deflating. I did remind them they didn’t win a game in 2018 and in 2019, we got 10-run ruled in our last game, and we went back and got to work and got to where we wanted to be,” Lemonis said. “So, as disappointing as this is, as frustrating, as embarrassing as it is, we still have everything out in front of us. We have the opportunity to go back home and work and get ready for a regional.”

The Bulldogs are now 1-6 in their last three trips to Hoover. They bounced back to reach the College World Series in both 2018 and 2019, however, and Allen said they’re counting on that experience to pull them through this difficult week.

“We’re going to go home and regroup. Go back to practice, have a good week of practice, and get ready for next week. I don’t know what else we can do,” Allen said. “We can lay down like everyone wants us to or go home and get back to work like we always do. My two trips here, we didn’t play very well at all here, so I’m not worried about it. Got to get back home and get this train rolling in the right direction.”

Vanderbilt gets walk-off win vs. Ole Miss at SEC…