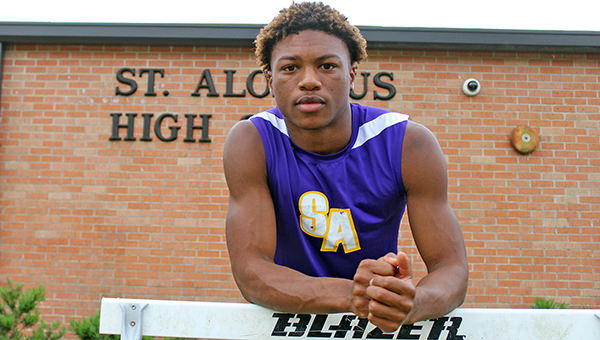 St. Aloysius' Brennon Williams is the 2021 Vicksburg Post boys' track and field Athlete of the Year. Williams won the MAIS Class 4A championship in the 200 and 400 meters. (Ernest Bowker/The Vicksburg Post)

The biggest rush that Brennon Williams gets from competing in track is the thrill of victory.

Zooming down the track with rivals nipping at his heels. Looking back to see them fading in the distance. Heading to the podium to stand above them all as the victor.

“It’s a good feeling,” Williams said. “That’s what makes it fun to me, is the rush that it gives you when you’re winning. Nobody wants to lose. You’re not happy when you’re losing. So that’s really the best part, is winning.”

It’s a part of the sport Williams has experienced often in his high school career at St. Aloysius. The senior sprinter won five state championships in three seasons — including the MAIS Class 4A titles in the 200 and 400 meters this year — and 10 state meet medals overall.

And now, one last time, he’s standing tall above the competition as The Vicksburg Post’s 2021 boys’ track and field Athlete of the Year. Williams also won the award in 2019 and is the sixth consecutive St. Aloysius athlete to earn it.

“Wonderful career. Without the pandemic year there’s no telling how many he would have won,” St. Al coach Michael Fields said. “He trained hard. He worked for everything he got, and hopefully he’ll carry that on to the next level.”

Williams has not yet signed, but said he plans to attend Southern Miss and compete for their track team. He’ll be coming in hot off of another remarkable season.

Williams won MAIS championships in the 110 meter hurdles and 400 meters in 2019, but did not get a chance to defend his titles in 2020 because of the COVID-19 pandemic.

He was the favorite this season in the 300 meter hurdles, but ran over a hurdle near the end of the race at the Class 4A South State meet and got disqualified. That left him in only two events at the state meet, and he was determined to make the most of them.

“That (300 hurdles) was my best event. It kind of messed me up. And I was going for the state record in that event but I messed around and got disqualified,” Williams said. “I knew I was going to get the other two because I was mad. I just had to focus on getting the other two.”

It was the sixth consecutive year in which St. Al has had at least one state champion in an individual event. It was the fourth different event in which Williams has claimed a gold medal. He was on the winning 4×100 meter relay team in 2018, and won the 110 meter hurdles in 2019.

“He’s got a drive. With the other guys he grew up with here at St. Al, there’s a tradition where they don’t want to be the one to not win. That puts some pressure on you,” Fields said.

Williams said he doesn’t mind the pressure at all.

“It’s pressure if you don’t perform as well because everybody is looking at you to do good,” he said. “But I wasn’t pressured about winning. I was just pressured about running as good as I can run. About getting my personal best every time I run.”

Now Williams will turn his attention toward competing at the college level. He plans to run the 400 meter hurdles at Southern Miss and keep pushing to get better.

“I’m grateful. I just try to keep getting better and focus on college,” Williams said. “I don’t want to be one of those people who don’t do as good in college. I want to prepare for that. That’s my biggest focus right now. I’m practicing every day and working.”

All-County Track: Mathews went from novice to champion in…