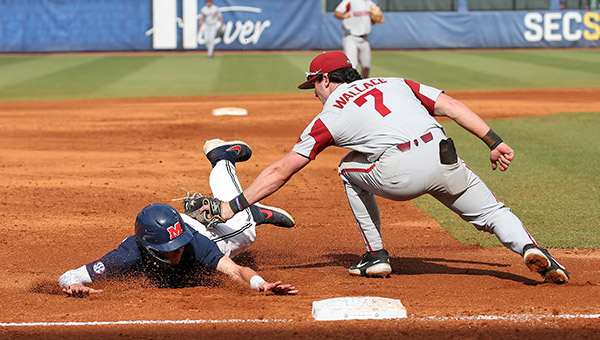 HOOVER, Ala. — The top two teams in the Southeastern Conference in the regular season will go head-to-head in a winner-take-all showdown for the league’s tournament title.

Arkansas (45-10) advanced to Sunday’s championship game against East Division champ Tennessee (45-15), which beat Florida 4-0 in the other semifinal. Arkansas has not won the tournament since joining the SEC in 1992. Tennessee won three straight titles from 1993-95 when separate tournaments were held for the East and West divisions, but has never won it against a full field.

Arkansas won two out of three games against Tennessee when the teams played in Knoxville earlier this month, but all three games were decided by one run. The winning run was also scored in the eighth inning or later in all three games.

“It doesn’t surprise me we’re playing Tennessee. They’re playing really well. They won the Eastern Division, we won the West. It’s going to be a really good ball game,” Arkansas coach Dave Van Horn said. “I think that they may be in a little better shape than us as far as pitching, but you never know. It’s just one game. I’m just really proud of our team getting through today and finding a way to get to that championship game.”

Ole Miss (41-19) will wait and see if it played its way into hosting an NCAA Tournament regional, or even a top-eight national seed with a strong run in Hoover. The Rebels won three elimination games and both of their losses were by one run against teams ranked Nos. 1 and 3 in the country.

The 16 regional host sites will be announced Sunday evening. The full 64-team NCAA Tournament field will be released Monday at 11 a.m., with a selection show televised live on ESPN2.

“I think we just need to keep playing with the same energy we had all week,” said Ole Miss shortstop Jacob Gonzalez, whose double in the fifth inning Saturday brought in the Rebels’ only two runs. “I think personally that we played way different than we have been playing. We were playing with a different vibe, like just more excited to play, more on the line, and it was a lot more fun too.”

No team has won more games in the SEC Tournament since 2018 than Ole Miss’ 11, and they added three to the total this season. The Rebels got outstanding starting pitching performances all week, but it was the bats that failed them in Saturday’s semifinal game.

They only had two hits in the last five innings — one of them was Gonzalez’s double that tied the score at 2 in the fifth inning — and only got one runner on base against Noland.

Noland struck out four batters and walked one in three innings to earn his first save of the season. Heston Tole (1-0), who pitched 1 2/3 innings of scoreless relief, earned the win.

Tole entered the game after Gonzalez’s double, with the bases loaded and one out. He struck out Tim Elko and got Hayden Dunhurst to ground out to first base to get out of the jam.

Cullen Smith hit a two-run home run in the first inning for Arkansas, and Battles was 2-for-3 with one RBI. Charlie Welch led off the sixth inning with a walk for the Razorbacks, went to second base on a groundout, and scored on Battles’ double down the left field line.

“Just one of those games where runs were at a premium today, I think for both teams. Wind was blowing in pretty strong from left field, knocked some balls down. I thought both staffs pitched really well,” Ole Miss coach Mike Bianco said. “So just one of those days where we had a couple opportunities where, if we would have hit one in the gap, maybe it would have been different, but credit them. They’re so good and pitched it really well, played really good defense.”