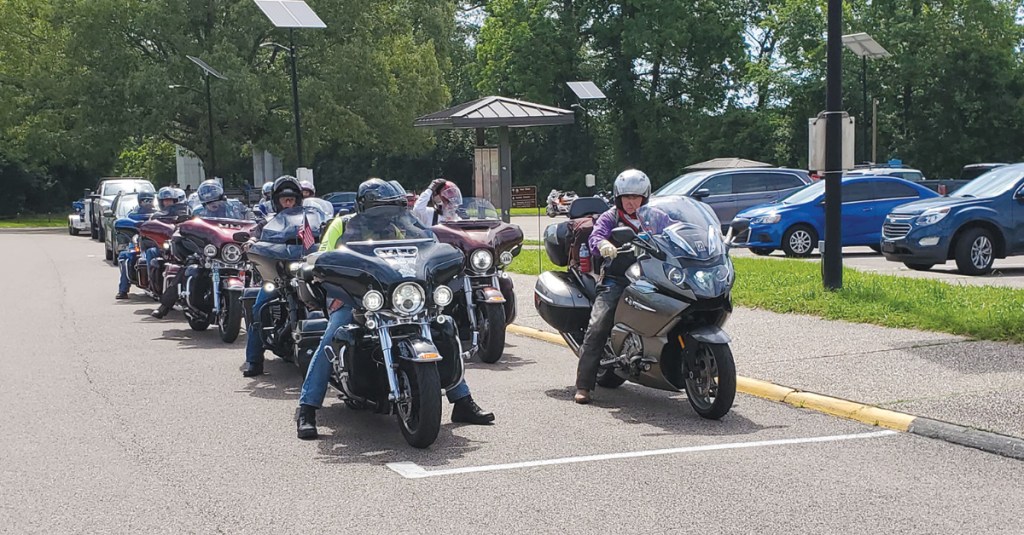 Members of a group of veteran bikers prepare to leave the Vicksburg National Military Park Tuesday to resume their trip to Washington, D.C., for the Run for the Wall. Although the run was canceled because of COVID-19, the bikers decided to go ahead with the trip to honor veterans. (Photo by John Surratt)

In 1989, Vietnam veterans James Gregory and Bill Evans, joined by 115 other veteran bikers, left San Diego, Calif., for Washington, D.C., on the first Run for the Wall to honor and remember those killed during the Vietnam War.

Fifteen bikers completed that first trip, and the run became an annual event that over the years has grown to involve 1,500 veteran bikers who arrive in the nation’s capital in time for the Memorial Day weekend to visit the Vietnam Veterans Memorial and take part in events in Washington. The ride now honors all veterans.

The trip’s cycle was broken in 2020 when it was canceled out of concern for COVID-19. This year’s run was also canceled because of COVID, but that has failed to stop some of the ride’s regular participants from striking out on their own and heading to Washington.

“This is the second year in a row it was canceled due to COVID, and this second time a lot of people said, ‘You know what, I’m going anyhow.’ So, they put together their own independent groups,” said veteran biker Michael Rollins. “These veterans are a dedicated group of individuals and they just didn’t want to sit by for a second year. These guys want to do this; this is the second year (it’s been canceled), and most of these guys have been vaccinated, so we’re just doing it.”

Rollins of Prescott, Ariz., is a Navy veteran of the Vietnam War who has participated in the ride since 2010. He said that the first ride “was the most intense ride of my life and the most enjoyable and rewarding ride of my life,” recalling the reception he and other riders received in towns along the way.

Rollins was making this ride with a 15-member group that began their run for the wall in Ontario, Calif., and stopped briefly at the Vicksburg National Military Park on their way east.

“The Run for the Wall started out as a single group, but it got so bogged down that it then became two groups, and it got bigger and now it’s three groups,” he said. “We have the central route, the midway route and the southern route and they typically have about 500 motorcycles on each route — a total of 1,500, all three routes combined.”

Because this year’s run is not sanctioned by Run for the Wall’s organizers, Rollins said, “There’s no official count; nobody really knows (how many riders are participating). We’ve met about a dozen other groups on the road, and this is just in the southern part of the country. They’re scattered all over the place so I’m personally estimating at least a third to half of the groups said, ‘We’re going anyhow.’”

He called the route the group is taking a tri-way route, “because we’re kind of zig-zagging our way through the routes.” He said the route takes them through Tennessee and into North Carolina, where they will take the Blue Ridge Parkway into Washington, arriving on Friday.

“We’ll enjoy the weekend in Washington, pay our respects at the Vietnam Wall and then we all go our separate ways. Some guys are riding back together,” he said.

“I’m going to meet my wife in North Carolina, and she’s going to ride back with me and we’ll be by ourselves. We’re going to Mobile Ala., Austin, Texas, and then home.”