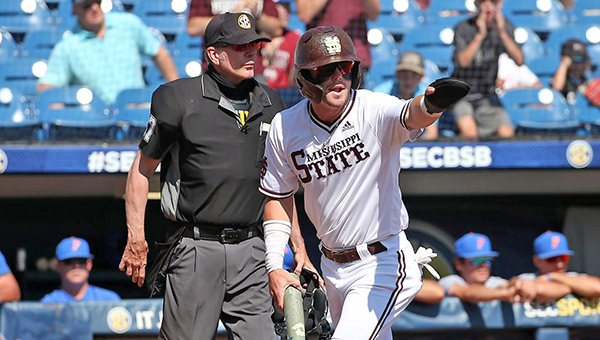 Mississippi State's Luke Hancock gestures to a teammate after scoring a run in an SEC Tournament game last week. Mississippi State earned a No. 7 national seed in the NCAA Tournament and will host VCU, Campbell and Samford in a regional beginning Friday at Dudy Noble Field. (Michael Wade/Southeastern Conference)

Mississippi State has earned a reputation for its homefield advantage at Dudy Noble Field. It hopes to enjoy it for the next two weekends.

Mississippi State received the No. 7 national seed in the NCAA baseball tournament when the 64-team bracket was released Monday, and will host a regional for the 15th time in school history.

Mississippi State and Samford will play the first game, Friday at 2 p.m. VCU and Campbell will play at 7 p.m. Both games will be streamed on ESPN3. The double-elimination regional will continue through the weekend, although game times beyond Friday have not yet been set.

Mississippi State has never played VCU or Campbell. It has a 37-10 all-time record against Samford, including a 10-2 victory this season in Starkville.

The Bulldogs have a 42-18 all-time record in regional games at Dudy Noble Field, and have won the last three regionals it played at home, in 2013, 2016 and 2019. They have advanced to the super regional round in four consecutive seasons overall.

Mississippi State is 25-8 at home this season.

As one of the top eight national seeds, Mississippi State will also be in line to host a super regional if it wins out in the regional round. The winner of the Starkville Regional will face the winner of the South Bend Regional featuring Notre Dame, Central Michigan, Michigan and Connecticut.

The Southeastern Conference had the most teams of any league selected to the NCAA Tournament, with nine. Among them was LSU, a bubble team that was among the last announced on the selection show Monday morning on ESPN2.

LSU will try to send longtime head coach Paul Mainieri out as a winner. He announced last week that he will retire at the end of the season, after spending 15 years as the Tigers’ skipper.
Conference USA got four teams into the tournament, including two top-16 national seeds with Louisiana Tech and Old Dominion.

Old Dominion, meanwhile, was the No. 11 national seed and the only one among the top 16 that will not play at home. The C-USA tournament champion was not on the list of pre-selected regional sites and will instead travel to Columbia, South Carolina for its regional.

Old Dominion will face Jacksonville in its first game, while Virginia and South Carolina comprise the other half of that bracket.

The other C-USA teams selected were regular-season champion Charlotte and Southern Miss. Charlotte will join Maryland, Norfolk State and host East Carolina in the Greenville Regional. Southern Miss will head north to Oxford and is in a regional with host Ole Miss, Florida State and Southeast Missouri State.

Other Louisiana teams making the NCAA Tournament were Southern University and McNeese State.

Southern will play No. 2 national seed Texas in Austin, and will be joined by Arizona State and Fairfield in that regional.

McNeese is headed to Fort Worth, Texas, to TCU’s regional. The Cowboys will play No. 6 national seed TCU Friday evening, while Dallas Baptist and Oregon State play on the other side of the bracket.