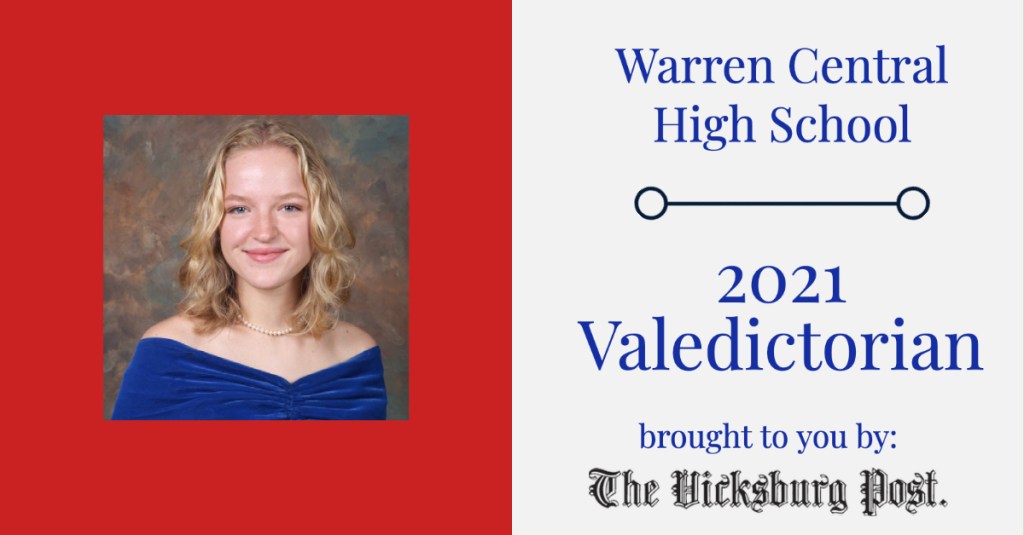 As an 11th grader, one of Ferris Andrews’s instructors told her she had a shot at becoming the valedictorian of her class.

Therefore she set her sights on the honor, and with hard work and dedication, on Thursday, May 27, in front of hundreds of people and her fellow students, Ferris delivered the valedictorian speech for the Warren Central High School graduating class of 2021.

Ferris said becoming valedictorian had never been a goal of hers until her junior year.

“A teacher reached out to me and told me that I had a good chance and that I was in the running for valedictorian, so that motivated me to work toward it,” she said.

Andrews is the daughter of Andy and Anne Andrews.

During the commencement exercises, Ferris said she focused her speech on the future and all it has to offer.

“I focused on looking forward into the future as the class of 2021 and taking on good change to make a better world,” she said.

Ferris said her success in becoming valedictorian was due in part to the encouragement she received from her family and teachers.

“I would like to thank my family and my teachers,” Ferris said, “Especially Ms. Desiree Kapler, Mr. Terry Wong and Mr. Matthew Gullet.”

These three teachers, she said, played a significant role in her education while at WCHS.

In addition to being named WCHS valedictorian, Ferris was a WCHS High Honors with Distinction graduate and was awarded the school’s Senior Valkyrie Art Director award.

She received the Mississippi Scholar award and the Ralph C. Honors academic scholarship from Rhodes College, where she plans to attend.

8th-Annual Ritz on the River brings Hollywood to Vicksburg