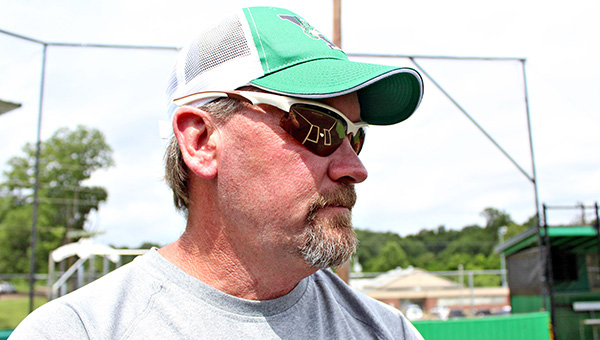 Vicksburg High's Brian Ellis is the 2021 Vicksburg Post softball Coach of the Year. Ellis led the Missy Gators to the MHSAA Region 4-5A championship this season. (Ernest Bowker/The Vicksburg Post)

One the things Brian Ellis tells every team at the beginning of the season, he says, is to “make a legacy.”
Win games. Win championships. Do something memorable.

After eight seasons as Vicksburg High’s fast-pitch softball coach, Ellis is leaving his own legacy in the program and the school. He guided the Missy Gators to the MHSAA Region 4-5A championship this season, as well as a playoff series victory that was overturned on a controversial appeal.

For heading up their success, Ellis has earned The Vicksburg Post’s softball Coach of the Year award for the second time in his tenure. He also won it in 2016.

“It’s always an honor,” Ellis said. “It basically tells me that we as a program have grown and I did some good things — which we did this year. We can’t do it if everybody isn’t working together.”

The 2021 Missy Gators only finished with a 9-13 record, but won the games that mattered — like a late-season matchup vs. Ridgeland that secured the region title — and were almost always entertaining to watch. Whether the latter was a good or bad thing was sometimes up for debate, though.

The Missy Gators blew several big leads, particularly early in the season, and lost three one-run games in which they scored six runs or more. As painful as those were, Ellis said he thinks they were beneficial in the bigger picture.

“We blew a lot of leads this year. We learned a lot from those,” he said. “There were a lot of those I considered good losses, meaning we learned a lot with them and grew from some of them.”

The Missy Gators also faced adversity in the playoffs. After losing Game 1 of their second-round playoff series against New Hope, they rallied to win Games 2 and 3 at home. The Game 3 victory was overturned, however, when New Hope protested the use of an illegal ball during the game.

The Mississippi High School Activities Association ordered the teams to replay Game 3, and New Hope won 9-5 to end Vicksburg’s season. Like the early-season losses, Ellis said he hopes his returning players use it as motivation for the future.

“It’s huge fuel, for one, just because of the whole thing that happened. In their minds and my mind, we won that series and were going to give Saltillo a game and get to play for the North State championship,” Ellis said. “That’s huge fuel right there, to get back to that point and prove to everybody in the North that it wasn’t a fluke. Watch out for us.”

After the final loss to New Hope, Ellis talked to his players and then quietly left the field, distraught. He didn’t get a lot of time to stew in his misery or process the situation, though. Within moments he was swarmed by family and friends. Eventually, he saw other familiar faces — a couple dozen former players who had come out to support him and the current Vicksburg team.

“I was in a proud stage. But I still was hurting because of the situation my girls had to go through,” Ellis said. “So when I was walking out there and they all stopped me and we started talking about when they played, and we got to laughing and everything else, that was one of the coolest things in the world. That’s a little thing that, for me, is huge. That’s my bonus.”

The return of his former players was a sign, Ellis said, that there is a tradition being built in Vicksburg High’s softball program.

He has spearheaded a transformation of the program that has included turning a dilapidated city recreational field into the team’s home field. A large fieldhouse, bleachers with chairback seats, and a pristine turf field now sit where weeds and debris covered the ground a decade ago.

On the field, he’s gotten the struggling Missy Gators to a point where they can compete on any given night, no matter the season.

“The first team I coached I told them we’re not going to be anybody’s senior night,” Ellis said. “Don’t schedule us because you think you’re going to beat us in front of your home crowd for your seniors. If you’ve got us on the schedule, we’re planning on going and trying to win a ballgame.”

And now, with a number of players returning for 2022 — to play, not just visit — he’s ready to take another step forward.

“We lose two starters, and we’ve got to make that up. I really feel like we’re in a good spot to where we’re going to be able to fill those spots,” Ellis said. “One thing we learned this year is we’re a team that when we play together, communicate and pick each other up, we’re a good team. I think that’s going to continue.”

OXFORD — Another page in The Legend of Tim Elko was written Friday night. The senior captain, playing on a... read more