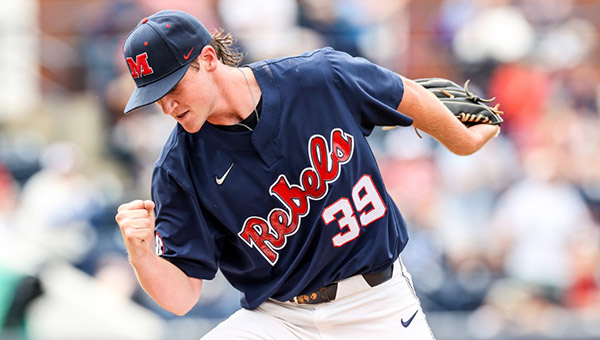 Ole Miss pitcher Jack Dougherty (39) celebrates after getting an out in the Oxford Regional championship game against Southern Miss on Monday. (Ole Miss Athletics)

OXFORD — This time, Southern Miss didn’t have enough grit, moxie or magic to overcome the monumental challenge it created for itself.

This time, it was Ole Miss writing the legends and walking away on top.

Ole Miss (44-20) advanced to the NCAA Tournament’s best-of-three super regional against Arizona beginning Friday night in Tucson, Arizona. It is Ole Miss’ second consecutive trip to the super regional round.

“Any time we’ve faced some adversity or had our backs against the wall, we’ve bounced back and won games and played well. Somebody said we’ve played our best baseball then, which I think is a really good trait,” Elko said.

Southern Miss (40-21) overcame deficits of three and four runs to win a pair of elimination games Sunday against Florida State and Ole Miss, and erased most of a 9-0 deficit in Monday’s championship game.

Reed Trimble hit two of the Golden Eagles’ six home runs as they clawed their way back into the game and got as close as 10-7 in the fifth inning. They added two more runs in the seventh inning on back-to-back homers by Danny Lynch and Will McGillis, but it wasn’t enough to complete the comeback.

“Last night we were the better team. Today, Ole Miss was the better team. But certainly it wasn’t without a fight, especially after getting down nine runs,” Southern Miss coach Scott Berry said. “We were running thin on pitching. That’s part of it when you play five games and you get in the losers’ bracket. I couldn’t be more proud of our team and our young men, and how we played to the end.”

Ole Miss hit five home runs on a day where the baseball was flying out of Swayze Field. Two of those came from Elko, who tore his ACL in early April and returned less than a month later to become a cult hero in Ole Miss’ stretch run.

Elko’s second-inning grand slam was his second of the regional, and his solo homer in the fourth inning gave the Rebels a 10-2 lead. Elko finished the game 3-for-3 with five RBIs and was selected to the All-Regional team.

“He’s just really good, but enough’s enough. Holy cow. It’s legendary,” Bianco said. “What seemed like maybe one of the biggest tragedies of not just our season but somebody’s career has turned into one of the biggest legends that we’ll be talking about for decades. And we’re seeing it live. That’s pretty cool.”

Nikhazy was far from the dominant pitcher he was Saturday against Florida State, when he had 16 strikeouts in a 119-pitch outing. He did, however, come on to get one of the biggest outs of the game.

With the bases loaded and two outs in the seventh, Bianco brought his ace in from the bullpen. Nikhazy struck out Slade Wilks on three pitches to keep the score at 12-7.

Nikhazy also pitched the seventh inning, giving up the back-to-back homers to Lynch and McGillis, before exiting. He was credited with his 11th win of the season.

“We asked the pitchers last night, get ready because it’s all hands on deck. We need to know if you’re OK, if you’re healthy, because that question is coming (Monday) morning,” Bianco said. “Last night I got home and got a text message from Doug Nikhazy saying, ‘Coach, I’ll start, I’ll relieve, I’ll do whatever you need me to do, but I’m ready to go.’ Those are special kids that really care about the program and makes what we do so cool as a coach. All they want to do is win.”

Taylor Broadway closed the game with two innings of scoreless relief for the Rebels. He allowed a two-out single to Reed Trimble in the eighth inning and then retired the side in the ninth for his 16th save of the season. Broadway struck out Lynch looking to end a game that included two weather delays and lasted nearly 4 1/2 hours.

“It’s just a surreal feeling, and obviously everything we’ve been working for is toward this moment,” Broadway said of getting the final out. “You just grab everybody and give hugs and just finally feel that feeling, especially after last night and being able to bounce back. We’re going to enjoy it for a little bit, but the job’s not done. We’re ready to handle business in Tucson.”