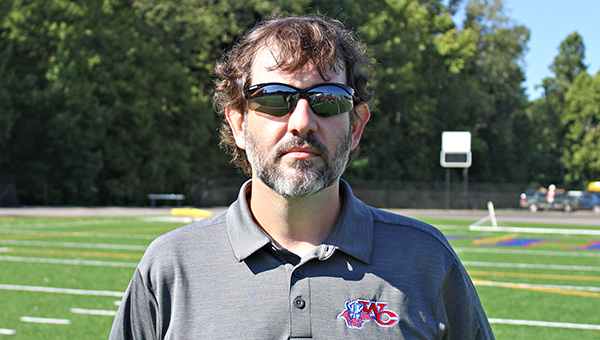 For 18 years Ross Coley has been a key figure behind the scenes of Warren Central’s athletics program.

He’s been a position coach with the football team and an assistant with the archery team. He’s worked the clock at basketball games and the scoreboard and public address system for baseball, and helped dozens of football players find college scholarship opportunities.

After nearly two decades, however, it was time for Coley to become the face of a program rather than a vital cog in the manchine.

Coley said Monday that he is leaving Warren Central to become the head football coach at Thrasher High School in Northeast Mississippi. Coley was born and raised in nearby Mooreville, and said the combination of going back home and getting his first chance to be a head coach was too tempting to turn down.

“I’m from up there. I grew up there and my family has lived up there for almost 200 years now. So it’s an opportunity to be closer to home. It’s an opportunity to put a stamp on a program, and to spread my wings a little bit and grow as a coach,” Coley said. “I’ve had ambitions of being a head coach for a long time and this kind of came up. I’m sad to leave here because so many people have embraced me being here, but at the same time it’s a great challenge.”

Thrasher is a Class 1A school located about an hour north of Tupelo. With only 134 students, it is among the bottom third of Class 1A schools in enrollment. The Rebels finished 3-5 last season and haven’t had a winning record since 2011, but Coley is hoping he’s the man to turn things around.

Saying goodbye to Warren Central might be a tougher task than rebuilding a struggling program. The 41-year-old Coley came to work at Warren Central fresh out of college in 2003 and filled roles in several programs over the years.

He started as an assistant with the ninth-grade football team, spent one year as its head coach, and then moved up to the high school program to become the offensive line coach in 2010. He has coached running backs and special teams for the past four seasons, along with being the program’s recruiting coordinator and statistician.

Handing off all of his side duties has been tricky, Coley said.

“Right now I’m trying to make this transition as smooth as possible,” he said. “Everybody here has been really great to me. They encouraged me to go and take the interview, and once I made the decision they backed me up and congratulated me. I’m just overwhelmed by the amount of love I’ve gotten.”

The support from both his coaching colleagues and the Warren Central community as a whole is something Coley said he’ll always treasure.

“I came here to coach football and I stayed for the people,” he said. “I don’t know if you could have taken somebody out of college and put them in a better situation. When I got there, there was 200 years of experience on the coaching staff.”

And now, after adding 18 years of his own to the current total, Coley said it was time to take what he’s learned and start a new tradition at tiny Thrasher.

“It was really emotional, but these opportunities don’t come along very often. It took me 18 years to get this one,” Coley said. “I’m sad to leave because I’ve made so many great friends here. But it’s an opportunity for me as a coach to grow. A ship is safe in harbor, but a harbor is not where a ship is meant to be.”