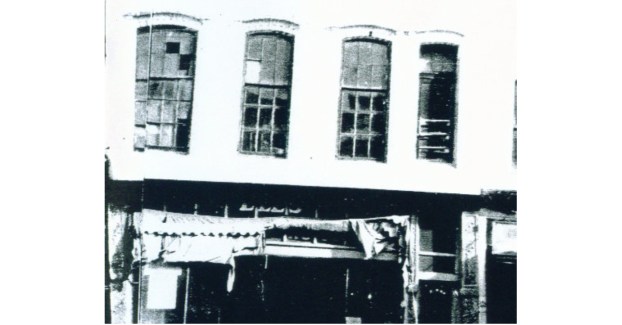 1115 Washinton Street as pictured in 1970. The antebellum building was later demolished as part of Urban Renewal. A parking lot stands in its place. (Photo submitted)

This building may have been built as early as 1860. In 1877, it housed the Lowenthal and Brothers Dry Goods Company. By 1883, it was the dry goods business of Alice Moguin and she lived upstairs.

Alice was born in 1836, married Joseph Moguin, and they had eight children, five of whom were alive when Alice died in 1905. Joseph died in 1871, leaving Alice to make her own living through the dry goods business.

One of her sons, George Richard (Dick), accidentally killed his own son, Edward, in 1902 when Edward started beating on the front door and breaking glass at Dick’s house on South Washington Street early in the morning after a late night of drinking and smoking opium. When Dick heard the breaking glass, he grabbed his gun and shot through the front door, killing Edward instantly. Dick had no idea that it was his son who was trying to break in and was devastated. He was absolved of any wrongdoing.

In 1904, the dry goods establishment in the building was owned by Samuel and Yetta Schrier. By 1911, Harry Lustberg operated a dry goods business in the building. In 1918, the store was visited by thieves entering from the roof. They escaped with 20 pairs of shoes, ribbons, two large coats and other dry goods. They tried to gain access to the safe with a “combination tool,” but only succeeded in jamming the combination and left the tool behind.

Lustberg advertised that “the Umbrella Doctor” was located in his store. “Dr.” M. Cornblatt would install new ribs or a new cover on your umbrella. Lustberg was still in the building in 1924, but by 1929, it was occupied by Meyer Dry Goods and in 1935, it was vacant. In 1959, Abraham Johnson, a tailor, had set up shop here and then by 1962, the Toggery had moved from two doors south into the building.

1115 Washington Street was one of 48 buildings on the street that were demolished during Urban Renewal. A parking lot occupies the space today.

Incumbents have earned another four years