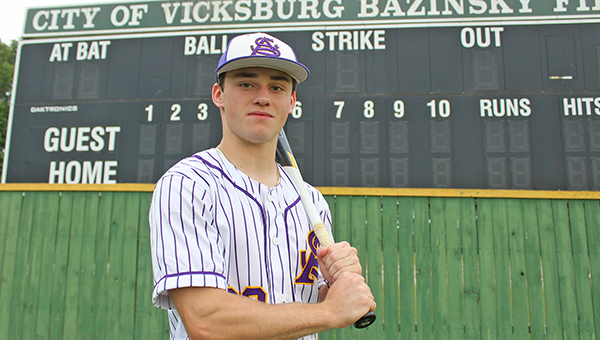 The most amazing thing about Wes Warnock’s amazing season wasn’t how great his final stats were, or the consistency he showed day in and day out. It wasn’t even a particular game or play.

It was how bad it all started.

On March 6, two weeks and seven games into the season, the St. Aloysius senior centerfielder was sporting a less-than-Ruthian .118 batting average. He only had two hits to that point, and none in his last 15 plate appearances.

“He was hitting some balls right at people and couldn’t catch a break. He wasn’t seeing the ball really well,” St. Al coach Sid Naron said. “He continued to grind, and after that eighth game I haven’t seen a player get as hot as he did for that period of time.”

After going 0-for-3 with a strikeout in that March 6 game against East Rankin Academy, something — scratch that, everything — changed for Warnock. He went from not being able to buy a hit to hardly ever making an out.

The balls that were hit right at people suddenly found holes. His line drives carried a little bit further into the gap. Oh-fer games suddenly became 2- and 3-fers.

March 6 was the last time this season that Warnock failed to get a hit. He had at least one in each of St. Al’s last 20 games. The .118 average became a bloated .494 by the time the Flashes played their final game six weeks later.

Warnock’s remarkable turnaround, and his key role in St. Al’s success, made him an easy choice as the 2021 Vicksburg Post Warren County Player of the Year. Besides leading the county in batting average, Warnock had 40 hits — including five triples and two home runs — and 21 RBIs, and he scored a county-best 36 runs.

Warnock is the first St. Aloysius player to win The Post’s Player of the Year award since Stephen Evans in 2009 and 2010.

“It feels really good. I feel like I did well this year. All the hard work I put in paid off,” Warnock said. “Last year we didn’t have a season and I didn’t know if we would come out and be able to play. My teammates helped me to do my best. I feel like I did my best and it paid off.”

Warnock hit a respectable .310 in the 2020 season that was shortened to only nine games because of the COVID-19 pandemic. He went 1-for-3 with a triple and two runs scored in the 2021 opener against Bayou Academy, had an RBI triple in the third game against Franklinton (La.), and then went four games without a hit.

Warnock did draw six walks and scored three runs in those games, and St. Al won three of them, which eased the sting a bit. It was still frustrating, though.

“I went through a little slump,” Warnock said. “Then once district play started I was hitting consistently every game. I was thinking too much in my head. I just got up there and hit.”

On March 8, in a 10-0 rout of Indianola Academy, Warnock was 2-for-4 with a single, triple and three runs scored. It was the start of the 20-game hitting streak that carried through the end of the season, and the first step in a remarkable turnaround.

Warnock had 10 multi-hit games and batted .593 during the streak. He went 5-for-5 and hit for the cycle in a win against Park Place on April 15 and, perhaps most impressively, almost always made contact. He did not strike out in his last eight games and 33 plate appearances, and only struck out twice in the last 15 games of the season. Both were in the same game against MAIS Class 4A runner-up Hartfield.

“I haven’t seen a turnaround like that. I’ve seen a guy slightly work his way back in and start creeping back up, but it was an immediate turnaround for him,” Naron said. “It really came over a weekend. He had some conversations with assistant coaches and just caught fire.”

Warnock said it was just a matter of clearing his head and relaxing.

“I feel like I was just seeing the ball better,” he said. “I was in my head a bunch at the start of the season. I kept thinking every time I got in the box that I wasn’t hitting good and I need a hit. And then I just quit thinking. I was seeing the ball good and taking good swings, and the ball was dropping somewhere.”

Although he hasn’t taken an at-bat in well over a month, Warnock has kept collecting hits since the season ended. He was selected to play in the MAIS All-Star Game in May — it was rained out, keeping his hitting streak intact — and signed to play at Mississippi Delta Community College.

The nightmarish start to 2021 gave way to a dream season, and Naron thinks there’s plenty more to come.

“He’s not even the player he’s going to be yet,” Naron said. “His brightest days are ahead of him. He’s matured a lot as a hitter, but he’s still got room to get stronger and more room to grow as a hitter.”