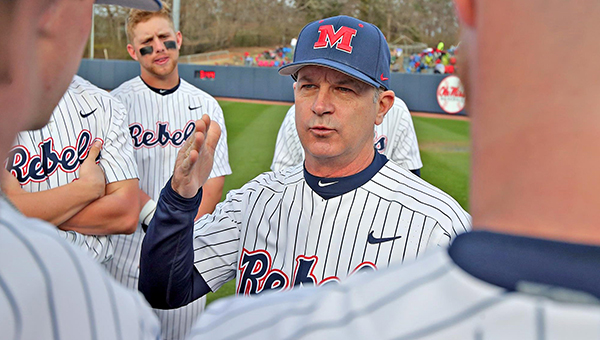 The longtime Rebels baseball coach and Vice Chancellor for Intercollegiate Athletics Keith Carter issued a joint statement Sunday night indicating that Bianco has agreed to a contract extension that will keep him in Oxford for the next four seasons.

Bianco has been one of the leading candidates for LSU’s open head coach position and reportedly interviewed with that school last week. Bianco was a starting catcher and team captain on the Tigers’ 1989 College World Series team.

“Ole Miss is home for me and my family, and I am committed to bringing championships to Oxford. I’m proud of what we have accomplished over the past 21 years, and I look forward to building on that foundation and achieving new levels of success,” Bianco said in his part of the joint statement. “I want to thank Rebel Nation for their unmatched support, year in and year out, and how they help make Swayze Field the greatest experience in baseball.”

Bianco has an 812-462-1 record in 21 seasons as Ole Miss’ head coach. He turned a long-struggling program into one of the best in the Southeastern Conference, with 17 NCAA Tournament appearances, seven super regional berths and two SEC tournament championships during his tenure. He got the Rebels through to the College World Series in 2014.

Ole Miss finished 45-22 this season and lost in three games to Arizona in the super regional round of the NCAA Tournament.

The 54-year-old Bianco signed a four-year contract extension — the longest allowed by state law — in June 2020. That contract paid him $1.19 million per season, plus incentives.

It was not clear from Sunday’s statement whether he has signed another extension yet or not, but Carter’s portion indicated the two sides have at least agreed on one.

“Mike Bianco is our head coach, and with his contract extended to the maximum four years, we look forward to seeing him lead Ole Miss to new heights,” Carter said.

Bianco’s ties to LSU made him one of the leading candidates for its vacant job after Paul Mainieri announced his retirement effective at the end of the season. In addition to playing at LSU, Bianco was the Tigers’ pitching coach for five seasons from 1993-97. His son, Drew, now plays at LSU as well.

“We understand that the consistent success of our program will generate interest from other schools, and with any coach, there can be personal factors that come into play,” Carter said in his statement. “Mike and I have been in constant contact and have been able to privately sort fact from fiction. Our program is poised to take the next step toward success in Omaha, and we believe Coach Bianco is the right person to guide us there.”