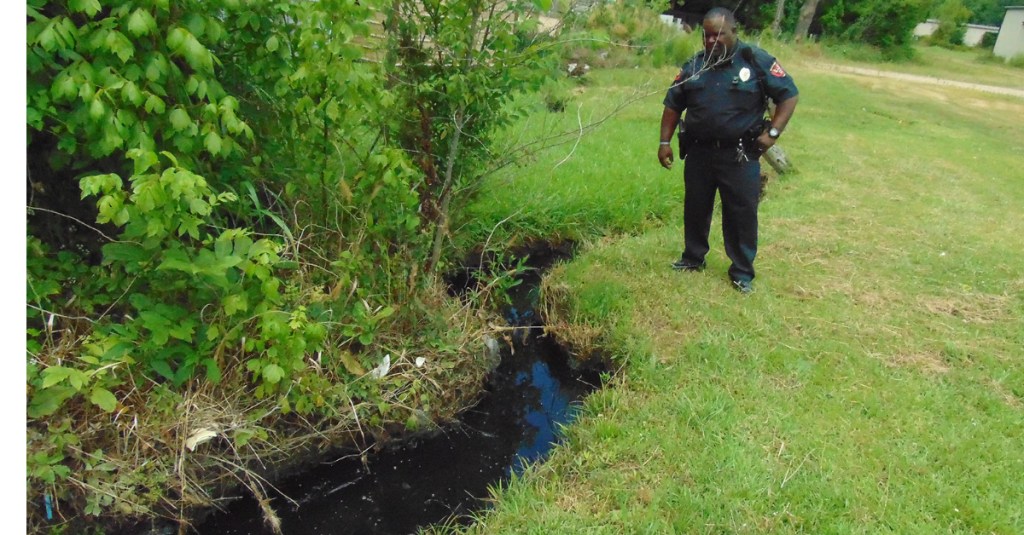 Vicksburg police officer Michael Battle watches as used oil moves through a stream off U.S. 61 South. The stream runs between Mid-South Lumber and property containing the vacant Lucky Fisherman restaurant and the proposed site for the city’s animal shelter. Authorities are looking for the source of the oil. (Photo by John Surratt)

Vicksburg authorities are trying to determine the source of what is believed to be an illegal oil dump in a small stream off U.S. 61 South.

The stream runs between Mid-South Lumber and the adjacent property north of the store containing the former Lucky Fisherman restaurant building and the city’s site for the proposed animal shelter. Authorities believe the substance was dumped during the weekend.

The black substance covering the water appears to be used oil. At one spot where the oil is thickest, the water was bubbling.

He said the Mississippi Department of Environmental Quality was also called.

Besides the fire department, Vicksburg police and the city’s development department are also involved in the probe. Mayor George Flaggs Jr., Monsour and North Ward Alderman Michael Mayfield were also called, he said.

Danczyk estimated about 100 gallons of waste oil was dumped in the stream.

“This is going to be a multi-agency investigation,” Danczyk said. “We’re going to do two things: we’re going to take care of the environmental first and get this cleaned up, and then try to find out who is responsible.”