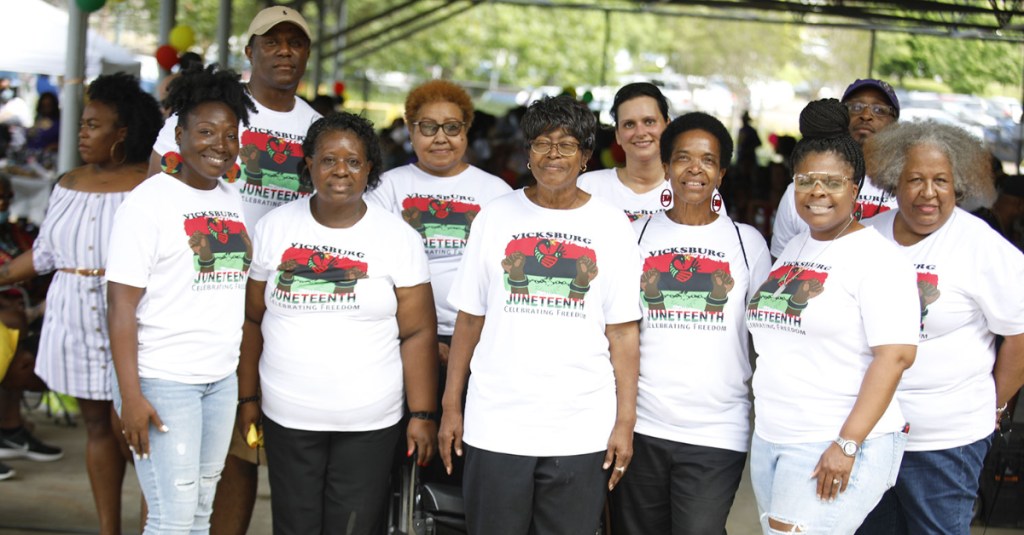 Vicksburg’s 2021 Juneteenth Heritage Festival took place on Saturday, and the day began with a reminder: “We are the answer to our ancestors’ prayers.”

“I love the opportunity to share the history,” Bingham Morrow said. “We were just trying to get Vicksburg kick-started, and it’s awesome that the federal holiday was approved the day before our celebration. It makes it that much better.”

The holiday commemorates June 19, 1865, when enslaved persons in Galveston, Texas were informed that they had been freed under the terms set forth in the 1862 Emancipation Proclamation. Last week, prior to Juneteenth celebrations across the country, President Joe Biden declared Juneteenth to be a federal holiday.

The event began with demonstrations of traditional African ceremonies including drumming and the offering of a libation, followed by the presentation of the Juneteenth flag and the singing of “Lift Every Voice and Sing,” the Black national anthem. A reading of “The History of Juneteenth” was given, and Ret. Brig. Gen. Robert Crear, of Vicksburg, read the Emancipation Proclamation.

“Understand that Juneteenth is a result of the end of slavery,” Bingham Morrow said. “Slavery came on with the middle passage. Our people were brought over from Africa, and these were celebrations that came with them. Even though they were on plantations or whatever, they still celebrated culture. There are a lot of things we do, at our family reunions, that are African-based.

Businesses from across Warren County participated in the festival, as spots for booths were fully booked for this year. According to event Vice President Gina Hendrickson, more than a dozen vendor slots have already been booked for the 2022 Juneteenth Heritage Festival.

Participating in Vicksburg’s Juneteenth festivities is something Brittany Simpson, owner of the soon-to-be-opened Alabaster Chic Boutique, said meant a great deal to her as an entrepreneur in the community. Simpson said her store will carry a variety of clothing and jewelry options, but for Saturday’s festivities, she wanted to showcase items that celebrate Black culture and Black womanhood.

“I just think that, we have to make sure that we show who we are,” Simpson said. “I just want everyone to celebrate who they are, and acknowledge that, and hold onto it with pride. I want to celebrate all women.”

The event continued with a prayer from Pastor James O. Bowman, Sr., who highlighted Vicksburg’s first organized Juneteenth celebration, which took place in 1999 in Marcus Bottom. Since then, he said, the event has grown.

Mayor George Flaggs also delivered remarks, speaking specifically on Vicksburg’s significant role in the Civil War and on enslaved persons in Vicksburg who fought and died to obtain freedom.

Let us never forget what happened here. …We got to this day because of the siege of Vicksburg, because of the United States government understanding that we should be free.”

Following Flaggs’ remarks, the festivities continued with children’s activities and prizes, including announcing the winners of the first-annual Juneteenth Poetry Contest. A series of workshops were also held on topics including finance and money management, local GED programs and other topics, hosted by Alcorn State University, Vicksburg-Warren School District and other individuals and organizations.

The event ended with a series of dances and musical performances from local artists.

Overall, considering the hundreds of people who attended, Bingham Morrow said she was motivated to keep Vicksburg’s Juneteenth Heritage Festival alive for years to come.

“We’re coming back every year, and it’s going to get bigger and better and we want people to continue to support it,” she said. “You can learn from every culture.”