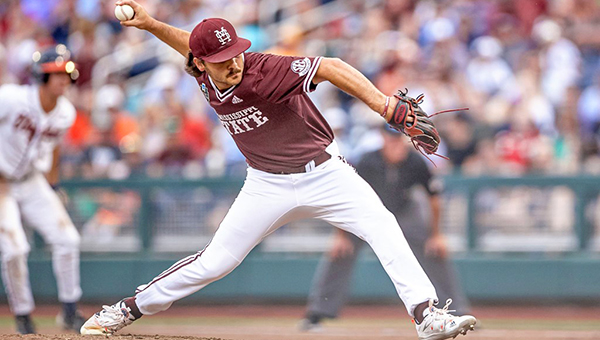 Mississippi State pitcher Chase Patrick delivers during a College World Series game against Virginia on Tuesday. Patrick was one of seven relievers the Bulldogs used in a 6-5 victory. (Austin Perryman/Mississippi State Athletics)

Bullpen puts Bulldogs in the driver’s seat at CWS

In a span of six batters Tuesday night, Mississippi State went from a no-no to 2-0 at the College World Series.

The Bulldogs scored six runs in the bottom of the eighth inning — five of them on a pair of home runs by Kellum Clark and Tanner Allen — to beat Virginia 6-5 and move within one win of a trip to the championship series.

While the offensive surge was stunning, however, the guys who made it relevant were a bit overlooked.

Seven relief pitchers picked up the slack after starter Christian MacLeod was knocked out of the game in the second inning. They combined to allowed one run over the last 7 2/3 innings, pitched out of a couple of jams, and held the line long enough for the offense to finally get in a groove.

“It’s awesome. Those guys — I mean, they’re dudes. Every single guy out there. They’re awesome,” said MSU closer Landon Sims, who got the last four outs of the game to earn his 12th save of the season. “Preston (Johnson) coming in right after Christian. And then Chase (Patrick) coming in first and third with one out and getting that double play. That was huge. And then Cam Tullar coming in there, getting those two outs, first and third, one out. And Parker Stinnett looked good and Cade (Smith) looked good. They all looked good. It’s fun to watch right there.”

MacLeod gave up four runs in 1 1/3 innings. He has allowed at least four runs in all four of his postseason starts, but this was the first in that stretch in which he didn’t make it to at least the fourth inning.

Virginia roughed up MacLeod for five hits and two walks to burst out to a 4-0 lead. Bulldogs coach Chris Lemonis went to the bullpen much earlier than he would have liked, but every arm he used came up big.

Preston Johnson took over for MacLeod and got out of a bases-loaded jam with two strikeouts. He pitched a perfect third inning before putting two runners on in the fourth and handing it off to Chase Patrick, who induced an inning-ending double play ball.

Parker Stinnett worked a scoreless fifth inning before giving up a single to Chris Newell in the sixth. Newell worked his way to third on a stolen base and passed ball, and Stinnett was pulled for Tullar. Tullar got two foul outs, with third baseman Kamren James running hard into the dugout rail and flipping over to catch the last one.

Tullar was making his first appearance since May 26. Stinnett and Patrick had both pitched in only one other postseason game.

“I’m proud of our team tonight,” Lemonis said. “We’ve had so many guys, and some guys hadn’t played in weeks because of postseason play. And it’s what we preach all the time, just be ready. Be ready, your time will come. Some of these guys got their time on the biggest stage.”

Cade Smith pitched a scoreless seventh — and wound up credited with the win — and in the top of the eighth Mississippi State’s bats came alive. The Bulldogs had not had a hit to that point against Virginia starter Griff McGarry, but Scotty Dubrule worked an eight-pitch walk and two batters later Kellum Clark homered.

Two more hits and a three-run home run by Tanner Allen gave Mississippi State the lead for good, and Dubrule drove in a key insurance run with an RBI single later in the inning. Allen credited the bullpen’s effort with keeping the Bulldogs’ hopes alive and spirits high.

“They came out and shut them down completely. That was huge because every time we get a 1-2-3 or they didn’t score in that inning, we’d always have momentum going to our dugout,” Allen said. “Like I said, we wouldn’t always come through, but we always had the momentum. And we kind of kept it out of their dugout. That played a big part of the game.”

The one blemish for the Bulldogs’ bullpen came in the eighth inning, when Stone Simmons gave up a one-out, wind-aided home run to Newell that just cleared the left field fence. He also gave up a single to Max Cotier two batters later and was pulled for Sims.

Sims threw about 50 pitches in a win over Texas on Sunday, but only needed 15 to get the last four outs against Virginia.

“I know I had to do some extra stuff because we gotta do everything we can to win every single game here,” Sims said. “I felt good. Coach Lem and Coach Fox are good not pushing me past any limits that I don’t want to push past. I felt good. I wanted to get the last three outs, and I happened to get the last four outs right there.”

The bullpen’s Herculean effort put Mississippi State (47-16) on the brink of its second appearance in the College World Series championship round. The Bulldogs got there in 2013, and then were swept by UCLA in the best-of-three series.

Mississippi State has also been in a good position in its last two trips to Omaha, only for things to suddenly fall apart. In 2018, it won its first two games and then dropped two in a row to Oregon State. In 2019 it won the opener and lost the next two.

Lemonis is hoping those experiences have taught the Bulldogs what it’ll take to finally break through. They can advance to the championship series by beating either Virginia or Texas — who face each other in an elimination game Thursday — on Friday night.

“They came here to win it. They’ve been here. They’ve walked off this field and felt they could have done more. And they’re invested right now and they’re playing great baseball,” Lemonis said. “And we’ve just got to get our work in and let these guys just keep playing games. And the way they’re playing we have a chance to play for a while.”

OMAHA, Neb. (AP) — Once Kellum Clark got that first hit, Mississippi State was on its way to another College... read more