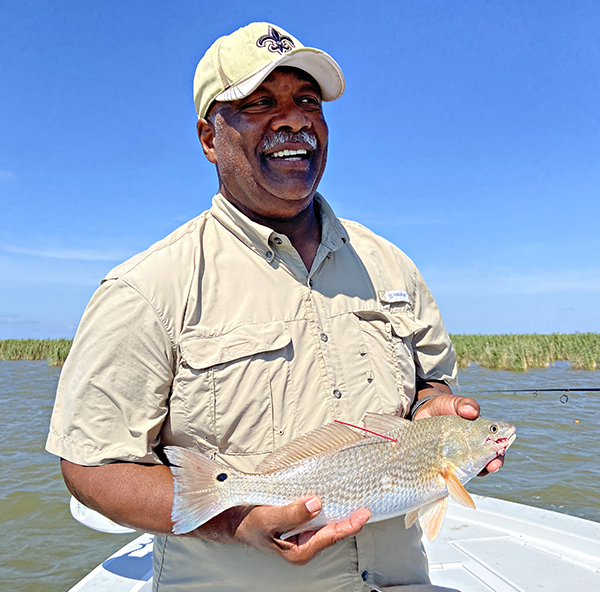 Vicksburg dentist Dr. Kenneth Nash caught this tagged redfish while fishing in extreme southeast Louisiana on May 30. The fish was one of 100 tagged and released by the Louisiana Coastal Conservation Association as part of a summer-long contest, and Nash won a new truck for catching it. (Submitted to The Vicksburg Post)

For years, Kenneth Nash had heard the tales of a prized fish lurking in the waters off the South Louisiana coast. Catching it would bring riches. Some people had reeled it in, only to be forced to throw it back because they were not worthy.

Eventually, Nash had his own encounter with the legend — and he was, indeed, worthy.

On May 30, the Vicksburg dentist was fishing in one of the southernmost parts of Louisiana when he hooked one of 100 redfish tagged by the Coastal Conservation Association Louisiana as part of a summer-long contest. His prize for catching it was a brand new Chevy Silverado pickup truck.

“I had no expectation until I hooked the fish and one of the guys in the boat with me said, ‘Hey, that fish has got a tag in it!’” Nash said. “I didn’t see the tag. I just said let me get this fish in the boat, and once we got it in the boat our guide said, ‘You’re not going to believe this. You just won a brand new truck.’”

Each year, CCA Louisiana sponsors its STAR tournament that awards prizes for the largest fish caught in a number of categories. It also releases the 100 tagged redfish all along the Louisiana coast, with more than $500,000 in prizes awarded for each one in the order they come in.

There is, however, a catch to this catch — fishermen must be members of the CCA to claim the prizes. Nash, an avid saltwater fisherman for nearly 20 years, said he joined the association in part because he’d heard stories of people catching the tagged fish without being members.

“I saw this happen too many times, where somebody would capture one of those tagged redfish and they weren’t a member, they didn’t register, and they had to turn it loose. It was a big prize that went through their hands,” Nash said. “So the last three or four years, I said, ‘OK, for $35 I might as well pay my membership. You never know when lightning is going to strike.”
On May 30, was when.

Nash was with a group fishing out of Venice, 75 miles south of New Orleans in the toe of Louisiana. It is the southernmost point of dry land in the state, just before the Mississippi River empties into the Gulf of Mexico. It was a normal weekend trip, the kind Nash takes a couple times a month, until the prized redfish hit his line.

“It was a lucky cast, in the right place at the right time, with a hungry fish,” Nash said.
Because the redfish prizes are awarded in the order in which they are weighed in — second prize in this year’s contest is an RV travel trailer, and others down the line include boats — Nash and his group immediately turned around and headed back upriver to Venice.

“The guide said you better hurry up because you want to be the first to weigh in. We were way down the Mississippi River from Venice, Louisiana, about 18 miles down river. We literally flew back up the river to that marina,” Nash recalled with a laugh. “I told them that’s the fastest I’ve ever run up that river. Sure enough, we got there in time and were the first.”

There was an anxious moment along the way, though. As they were heading back to port, Nash said he couldn’t remember if he was still a member of the CCA. As they motored up the Mississippi, Nash excitedly looked for his membership confirmation.

“He asked if I was a member and I said yeah, but then I thought about it. I could not remember if I had renewed this year. Everybody else in the boat is going crazy and I’m sitting there and can’t remember if I registered,” Nash said. “We were out of cellphone range and it dawned on me to check my emails. Finally I found the one that said confirmation. Back in April I had paid my registration. I said, ‘YES!’”

As it turns out, the group needn’t have hurried. Nash claimed the top prize of the truck, and none of the other tagged redfish have yet been caught.

“So far, they have not had another weigh-in or anybody turn in one that was tagged. They did have a lady in Florida catch one the same weekend I did, but she was not a member. So she just let it go back in the water,” Nash said.

Nash has not yet received his prize. The contest runs through Labor Day, so he’ll get it in September when the CCA holds an awards banquet in Baton Rouge. He’s unsure, though, whether he’ll keep it or trade it in.

“I haven’t totally made up my mind yet. For one, I’ve always driven Ford trucks,” he laughed. “I don’t know if I want to keep the Chevy or I just might trade it for a Ford. Right now we’re just going to revel in the fact that we’ve got a truck.”

Nash added that, while the truck is certainly a nice bonus, having the chance to tell this kind of fish story is an opportunity he was glad did not get away.

“It was just an amazing thing to have done it,” Nash said. “All these years I’ve heard about this tournament and people catching these tagged fish, and I’ve watched shows where they were out there releasing these fish, and to say it finally happened, I finally caught one, it’s not as real as when you catch one. That’s a great thrill in itself.”

There are plenty of goings-on in this part of the world this week. Vicksburg will host the Miss Mississippi competition,... read more