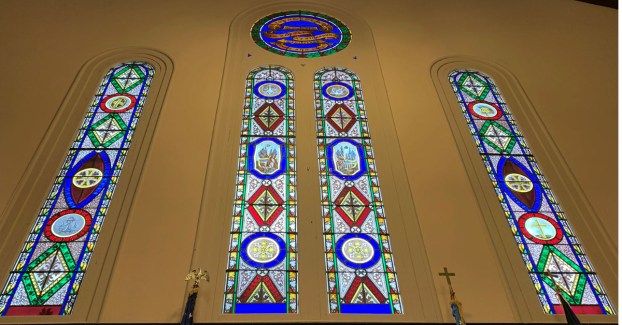 Church of the Holy Trinity window project moving along

They are among Vicksburg’s greatest treasures.

The stained glass windows at the Church of the Holy Trinity are a point of pride for the congregation and one of the top attractions for tourists on the riverboats that visit the city.

“Trinity is the No. 1 tour stop, including the battlefield, for all the riverboats,” said church historian Tim Ables. “People want to come see Trinity Episcopal Church and the Tiffany windows.”

“The oldest windows in the church are at least 140 years old,” Ables said. “Those that are newer that were installed between 1880 and 1962.

Four are more than 50 years old. The more recent ones before that would have been in the 1930s, so we’re getting close to where most of them are at least 100 years old.”

However, time and weather conditions have taken their toll on the windows, causing them to lose the brilliance they had in their early years. A project is underway to restore them to their original beauty and preserve them for the future.

“We had been talking about the windows, which are one of our most precious assets of the church, and we talked for years about the need for maintenance and restoration on the windows,” said church member Steve Saunders, project manager for the church’s estimated $350,000 effort to restore and preserve the windows.

“This year our vestry decided to move forward with restoration of the windows and hired Andrew Young from Pearl River Glass Studios in Jackson to do the work,” Saunders said.

Young, he said, performed an assessment of all 34 windows, looked at the condition and needs of the windows and helped church members develop a scope of work to clean, restore and preserve the church windows.

Part of the project involves removing the exterior coverings installed behind the windows more than 50 years ago and replacing them with clear, laminated safety glass.

The old panels had darkened, making it difficult see the windows, and allowed moisture and heat to build up, Ables said, causing mold to develop. The new glass panels will be vented to allow air to circulate and water to drain.

Saunders said the restoration project began in February, starting with the north and west windows. Work on the south and east windows begins next.

“We’re finished with the north windows; we’re working on the west wall windows now,” he said.

The west side windows, the church’s oldest, were installed in 1880, the same year the first service was held in the church.

“The west wall is what we call the reconciliation memorial,” Ables said. “Those are the oldest windows in the church. In the same year, three other windows were installed at the other end of the church.” Those are very special to us because of the theme.”

By 1880, when the windows of the reconciliation memorial were being installed, Ables said, “there was still a lot of heartburn in America over the Civil War.”

The vestry at that time, he said, decided to not just place a memorial dedicated to soldiers, but make it so it covered the soldiers of both sides, North and South, who died in the Civil War.

“For the time they were doing it, it was a very significant outreach to say, ‘Let’s have peace with one another.’”

The west wall also holds the church’s “youngest” windows: four stained glass windows of the apostles Matthew, Mark, Luke and John located in the church’s tower that were installed in 1962. Those windows, Ables said, have been restored.

The north wall contains seven windows that were installed in the late 1800s and early 1900s.

“They are a collection of various memorials that families gave to the church in memory of loved ones. There are three Tiffany windows on that side, including what we believe is the first Tiffany window that was installed in the church,” Ables said.

All those windows, he said, are in “pretty good shape. All seven of those were able to do the work with the windows being taken out.”

The south wall also has seven windows, and three of those are Tiffany windows.

One Tiffany window on the south wall called “Hope,” Ables said, was removed and taken to Jackson for work. The cost of repairing and restoring that one window, he said, is about $30,000.

The east wall, Ables said, is the chancel or sanctuary wall above the altar.

“They (the windows) were installed in memory of three of the church’s founders, all of whom died in 1878,” he said. “Two of them died as a result of Yellow Fever and the third had a serious medical condition and he happened to die during the same time.”

All three died within a month of each other in September 1878, he said, and two of the windows have the wives included in the memorial. The wives died within a year of their husbands dying, “so we lost five very prominent, beloved leaders in the church during the epidemic.”

Two years after the epidemic when the church started to resume services, the congregation decided that was who would be memorialized in that prominent place in the front of the church.

Church officials plan to raise the money for the project through a fundraising program called “Lights to the World,” a three-year program to raise the $350,000 cost of the project.

“We’ll have materials on the windows and the drive ready to distribute and explain the why and the importance and the cost,” she said, adding that Andrew Young will also give a presentation on the windows.

Marascalco said church officials have been promoting the fund drive throughout the parish and to people who may have a connection to the church, either because they grew up in the church, had a family member memorialized or attended concerts and other events at the church.

“This church was built by donations from people all over the community, so we certainly want to reach out again,” she said.

Ables said the restoration project “was something we could not in good conscience put off. Once we had a really first-rate professional assessment of this, the vestry decided we’ve go to get going on this. These are too precious not to get going with this.”

“It is a 100-year investment,” Saunders said. “What I’ve found really unique here is all these windows in this church were memorials to somebody, and individual people raised the money, got a contractor and a stained glass artist and commissioned each window individually and had it installed in the church.

“These were individual families who went and sought out Tiffany Studios and had a window designed by Tiffany and paid for by that family,” he said.

The winner of the 2021 Miss Mississippi Competition and recipient of a $10,000 scholarship provided by Ameristar Casino and Hotel... read more