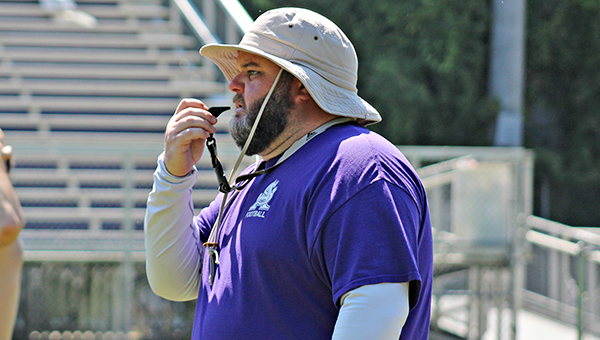 It was a 90-degree morning at St. Aloysius’ Balzli Field, and Bubba Nettles was starting to lose his cool.

The first-year St. Aloysius head coach had spent a couple of hours watching his team muddle through a summer workout. A series of sprints was interrupted by an angry, but measured, pep talk that got things back on track, but Nettles remained frustrated.

“We can’t go backward. We have to stack good days on top of good days,” Nettles said afterward. “A train is not meant to go in reverse, and this train has left the station on April 14 when I was hired as head coach. I fully intend on continuing its forward path.”

The sluggish effort, thankfully, was more of an aberration than the norm, Nettles added. His first offseason as St. Al’s head coach has seen the program take what everyone involved hopes are the first steps toward a brighter future.

St. Al has made the playoffs in five of the past six seasons since joining the Mid-South Association of Independent Schools, but has not won a playoff game since 2015. It has one winning record in that span.

Nettles said breaking a mindset of mediocrity has been a big theme this summer.

The Flashes reached the halfway point of their summer schedule this week. They’ll take the next two weeks off — one of them is an MAIS-mandated dead week — before returning July 12 to begin the run-up to the regular season.

The first half of the summer focused mostly on conditioning, and the second will include more actual football. The team will also host a youth camp July 12-15 at Balzli Field.

The season opener is Aug. 20 at Park Place Christian in Pearl.

“Trying to build that confidence is the biggest thing. Not winning on the football field, it’s hard for them to be motivated,” Nettles said. “We have a bunch of kids that are motivated and want to do well, and I’m hoping the rest of them that only have one foot in the water will all jump in with them. Slowly but surely, it’s coming around.”

Nettles said he’s also feeling his way through this first offseason as a head coach. He spent the past decade-plus as an assistant at Vicksburg High and St. Al, and got his first chance to be a head coach when Stacy Sizemore stepped down this spring.

Nettles learned plenty of the tricks of the trade over the years, and said one is standing out above all the others as he begins his tenure with the storied program.

“It’s very nerve-wracking, but I fully believe that I’m up to the task to do it,” he said. “I think my positivity goes a long way. I believe we’re going to achieve what our goal and expectation is, and I think they feed off of that. If I came out here every day and was a negative nelly, complaining and moaning that it’s hot, then they’re obviously going to do the same thing. The biggest thing is maintaining as much positivity as we possibly can.”