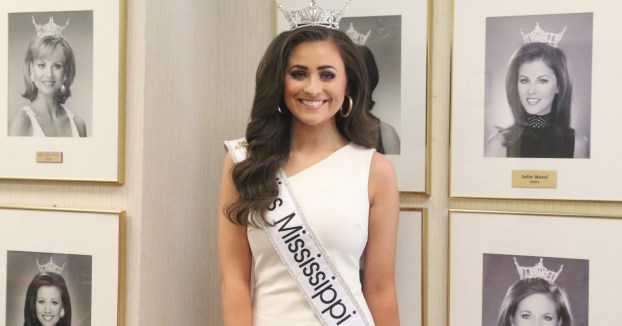 Even after her name was called, the crown was placed on her head and an evening of festivities was held in her honor, Miss Golden Triangle Holly Brand is still having a hard time grasping the idea she now holds the title of 2021 Miss Mississippi.

“I’m still in shock. I woke up this morning and thought that I had to compete again and realized, ‘No, it’s all over,’” Brand said.

While she is still letting it sink in, the Meridian native said she is ready for the year ahead, which includes preparing and competing for the national title.

“I am so excited to be Miss Mississippi at the 100th anniversary of the Miss America Competition,” Brand said. “I just got my schedule for the prep so I am very excited.”

Brand, who served as 2017 Miss Mississippi’s Outstanding Teen, decided to compete in the Miss Mississippi Competition for the first time in 2019, but didn’t even make the top 10.

This, she said, spurred her to do some self-reflection.

“I found myself saying things the winner would say because it sounded good. But I really wasn’t being my true authentic self. So over the last two years, I have spent a lot of time trying to figure out who I am and what I stand for and what my brand is,” she said.

Discovering that she was a service-oriented individual, Brand said she used this “theme” to prepare for all phases of the competition.

“That was my brand for the Miss Mississippi Competition this year and it is one of the four points (service, style, scholarship and success) of the crown.” she said. “Clearly it worked out well, but I think just spending time and thinking about who I was and who Holly Brand is (what helped with the success.)”

Brand also credited her parents for her achievement, as well as Mia Bella Prom who helped with wardrobe.

“One of the biggest thanks I have to give is to Heather Sumlin. She was my mental management coach. She has always helped me get in the right mindset for competition. Miss Mississippi week is a mental game, so before every phase of competition we had a checklist of things I would go through in my mind to make sure I was at peace and I was ready to tackle that portion of the competition,” Brand said.

As a 7-year-old, Brand said she began “laying the foundation” for her social impact initiative when she started Teddy Bears For Troopers.

“I collected stuffed animals for highway patrol officers to give to children in car accidents,” she said.

Brand did this for 11 years.

In addition to bringing attention to volunteerism, Brand is also working with the Volunteer Mississippi Organization in an effort to help individuals and groups connect with those wanting to volunteer to those seeking assistance.

While traveling the state as Miss Mississippi, Brand said she will work to connect people to one of the eight regional hubs in their area associated with the Volunteer Mississippi Organization.

“You can go to their website or you can sign up for emails as a volunteer and they will send you emails every time there is a volunteer opportunity in your area,” Brand said of the organization.

Through the East Mississippi Hub, Brand helped tackle the COVID needs in the community and served as the COVID-19 project coordinator with the Hub. During her last semester at the University of Alabama, she said, she also partnered with three Mississippi colleges to help combat sexual assault on college campuses.

Brand is hoping her education will help her become a contemporary Christian artist.

She said she competed in the X-Factor when she was 13 years old, and realized at that time working in the music industry is much more than just the ability to sing.

Therefore, Brand said she decided to work on her musical abilities at home and in college focus on other aspects of the music industry.

“Getting a communications degree has really helped me figure out who I am, how to present my case to a record label company and why they should sign me. So I am really thankful for the education that I obtained in that area at Alabama,” Brand said.

The Miss America Competition will be held at the Mohegan Sun in Uncasville, Conn.

“I am so excited to represent Mississippi at the Miss America Competition,” Brand said. “I love this state and I love this organization and the opportunity to wear this state across my chest —  a state I called home my entire life — I think will just be a wonderful moment for me and so exciting.”

Brand said she was a child when she first became interested in competing in Miss America. She had been watching the competition on television and was enamored by the evening gown phase. She recalled emulating what the contestants were doing and making sure she was getting it right, had asked her mom for a critique.

This earlier time in her life left a lasting impression and Brand hopes that when she is on the stage competing at the Miss America Competition, she too, will inspire other little girls, just as she had been inspired .

“That would just be way too cool,” Brand said.

He came close when named the third runner-up to Mr. United States in 2017. But this past June, Vicksburg native... read more