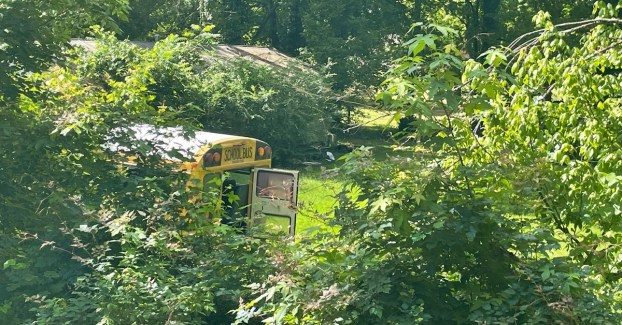 The emergency door of this school bus was opened by a 6-year-old Vicksburg-Warren School District student who was left on the bus after it finished its route Wednesday morning. (Photo Submitted)

A 6-year-old child who fell asleep on the way to summer programs at Sherman Avenue Elementary School woke up Wednesday morning to discover herself alone on the school bus at her bus driver’s home.

The child proceeded to wake up and exit the bus through the back door emergency hatch.

“It could’ve been real bad,” Warren County Sheriff Martin Pace said of the incident. “After the other students were dropped off, the bus driver returned to his home on Fisher Ferry Road and parked the bus.

“The child awakened, realized that she was on the bus alone, accessed the emergency door and exited the bus. A passing motorist picked the child up and she was able to provide directions to a relative’s house; the motorist transported her there, where the Warren County Sheriff’s Office was contacted.”

Pace said all information collected by the sheriff’s office had been turned over to the Vicksburg-Warren School District. As the sheriff’s office investigation is completed, the reports will be forwarded to the District Attorney’s office to see if any criminal charges are applicable.

VWSD Superintendent Chad Shealy said “the safety of our students is our top priority.

“The district has safety protocol procedures for transporting students and all staff has been trained accordingly. Any reports or breaches of these protocols are investigated fully and the appropriate actions are followed,” he said.

“In order to increase safety, last school year we ordered the No Student Left Behind Alarm System devices for all buses to help eliminate human error. With this system, an alarm activates at the end of the route, and the driver has to walk to the back of the bus to turn it off. This ensures that the driver inspects each seat to confirm that the entire bus is empty.

“This system has been installed in some of our buses, but due to a backorder, not all devices have been delivered,” Shealy said. “We anticipate the entire fleet will be equipped with the devices by next school year.”

It was not disclosed whether the school bus in question was equipped with the alarm system.

Family members said the child was examined by medical professionals for signs of dehydration and is in stable condition.

As of Tuesday, there are no reported cases of the COVID-19 Delta variant in Warren County, according to the Mississippi... read more