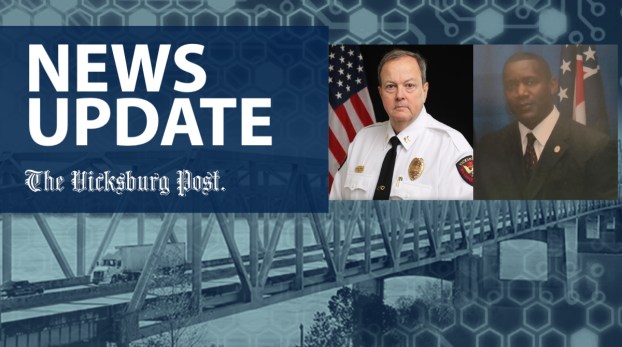 Mayor George Flaggs Jr. has announced his recommendations for deputy chiefs of the Vicksburg Police Department.

According to information from the mayor’s office, Flaggs recommended Capt. Mike Bryant, the police department’s present internal affairs investigator/accreditation manager as deputy chief for administration and Charlie Hill, the former deputy director of the Mississippi Department of Public Safety, as deputy chief of operations.

The Board of Mayor and Aldermen must approve the nominations at its first meeting of its new term July 6.

“We believe that both of these individuals are highly qualified for these positions and that they will be excellent additions to the working leadership team of the Vicksburg Police Department.”

He has a bachelor’s degree in criminal justice and has received specialized law enforcement training from the Federal Bureau of Investigation, Mississippi Law Enforcement Training Academy, the Center for Domestic Preparedness, Public Agency Training Council and Institute for Police Technology and Management.

Hill has worked with the Mississippi Department of Public Safety as a lieutenant/deputy director and lieutenant/director of the sex offender registry.

He studied criminal justice and has received training from the state of Mississippi and the Federal Law Enforcement Training Centers. He was recognized as a Top Cop in 2012 for outstanding performance and leadership, Enforcement Officer and Trooper of the Year in 2005 and Officer of the Year at the Vicksburg Police Department in 1999.