Camels to return to Vicksburg National Military Park on Saturday 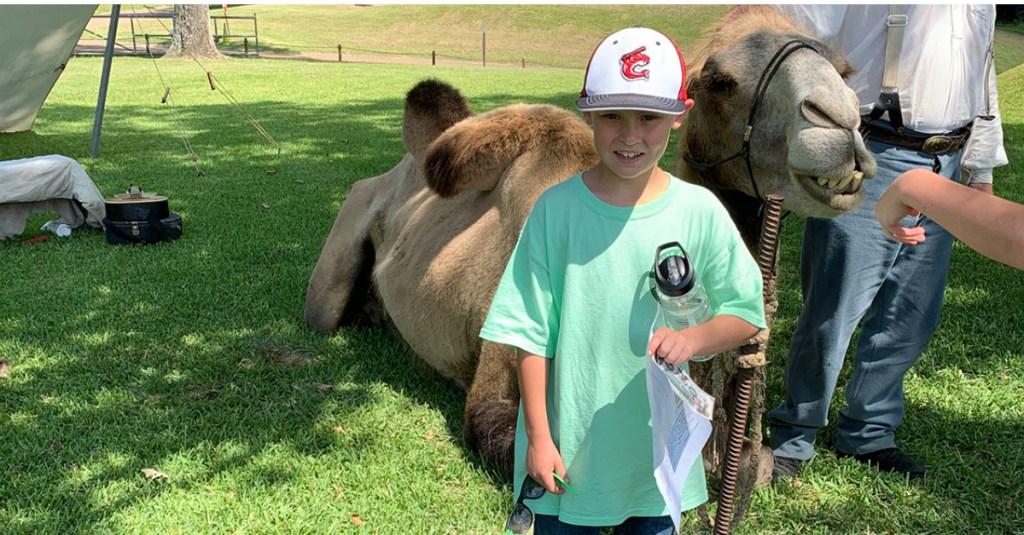 Drake Tillotson poses in front of a camel at the Vicksburg National Military Park, Thursday. Tillotson participated in the VNMP Junior Ranger Camp, A Soldier's Life for me. During the camp, participants learned about Douglas the camel. "Old Douglas" as he is sometimes referred was a domesticated camel used by Company A of the 43rd Mississippi Infantry, part of the Confederate Army during the American Civil War. (Photo by Terri Cowart Frazier | The Vicksburg Post)

Camels will once again grace Vicksburg with their presence on Saturday at the Vicksburg National Military Park.

The park is hosting an event to commemorate the 158th anniversary of the Surrender of Vicksburg this weekend. Cannons will be firing four times a day on Saturday and Sunday, and Doug Baum’s camels will be visiting on Saturday. The camels will be there to represent one special soldier who lost his life in the war.

Old Douglas, a camel, was part of the 43rd Mississippi Volunteer Infantry in 1863 during the siege of Vicksburg. Douglas made the ultimate sacrifice when he was shot and killed while grazing — turning into supper for hungry Union soldiers. His grave is one of the more than 17,000 soldiers’ graves in the Vicksburg Memorial Cemetery.

“The camels are a family favorite and a different story than most stories told about the war,” Chief of Interpretation, Education and Partnership Brendan Wilson said.

The camels will be available to see outside of the main visitor center inside the park from 8 to 11 a.m. Wilson said they are excited to bring back the artillery demonstrations and programs to the park this year.

All the programs within the event are free to the public. Be mindful of the weather, as programs could be canceled in the case of inclement weather.

The Vicksburg National Military Park is following CDC guidelines regarding COVID-19. They ask visitors to be mindful of CDC recommendations, and that those unvaccinated wear a mask indoors and within large gatherings outdoors.