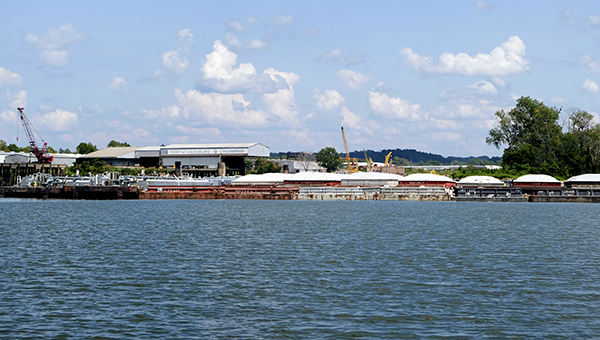 The Warren County Board of Supervisors and the Vicksburg Board of Mayor and Aldermen voted Monday to each pay a portion of the required 30-percent match for the RAISE Discretionary Grant from the United States Department of Transportation.

Formerly known as BUILD or TIGER grants, President of the Vicksburg Warren County Partnership Pablo Diaz said during the Monday supervisors meeting that funds for the grant would be used to help fund the much-needed expansion of The Port of Vicksburg.

The total amount allotted for RAISE grants is $1 billion, and the maximum award per individual project is $25 million. No more than $100 million may be awarded to the same state.

In order to qualify to apply for the grant, Diaz made a presentation to city and county officials on behalf of the Vicksburg Warren County Partnership and the Vicksburg Port Commission to request $3,750,000 from both entities as part of a 30-percent cost match required by the terms of the grant.

“This is our very first application (in the RAISE Grant process). It is very competitive,” Diaz said. “There is no guarantee that we will get it, but it is highly important that we try, and if we don’t get it, we will still get points for the second time we apply for it later on.”

The grant application is due Monday, he explained, so time is of the essence. In addition to the support of the city and county, Diaz said the Port Commission has also received a letter of support from Congressman Bennie Thompson and the Mississippi Development Authority.

The request was met with some hesitation by District 2 Supervisor William Banks.

“Is this a city project that you’re marching on?” Banks said. “This is for the new port? Maybe (the city supported this) but I wasn’t along with that.”

Diaz explained that, should the grant be awarded, the management of funds would not fall under the purview of the city or county, but instead would fall to the port commission. However, because the city has historically handled more federal dollars than the county and port commission, the grant writing consultants felt it was best to have the city be the lead entity for the grant application.

District 3 Supervisor Shawn Jackson pointed out another aspect of RAISE Grant guidelines is demonstrating a positive impact on lower-income communities. District 1 Supervisor Edward Herring said he agreed, and highlighted a need for affordable housing in the area to accommodate those working at the new port.

“I can fully support investment into an establishment that brings jobs, but I think a second layer to that is, we also have to be laser-focused on housing for these jobs,” Herring said. “We can build all the industry in the world, but if they live in Hinds, Madison, Rankin County, there goes our ad valorem (taxes). I hope we are prudent, for the sake of long-term velocity.”

Vicksburg Mayor George Flaggs Jr. said he was in support of the grant, calling it a “significant start” to the port expansion.

An 8-year-old child escaped serious injury Monday afternoon when she was struck by a car on Garden Grove Street in... read more