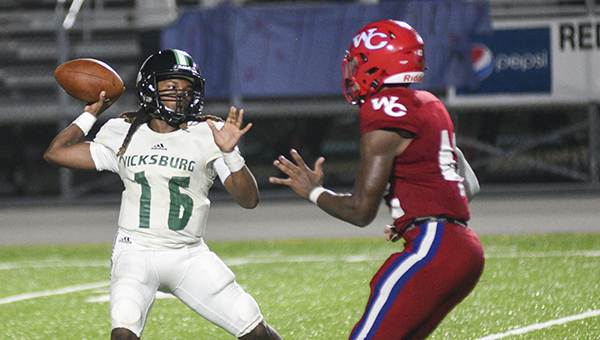 As it approaches its 60th birthday, the Red Carpet Bowl is entering the digital age.

No paper tickets will be sold for this year’s games, Red Carpet Bowl committee chairman Mark Buys announced this week. Instead, they will be sold only through the online service GoFan. Fans can purchase the tickets through an app or online at GoFan.co and use their smartphone to redeem them at the gate.

Many colleges, pro teams and high schools — including Vicksburg High and Warren Central — switched to electronic ticketing systems during the COVID-19 pandemic in 2020, and Buys said it made sense for the Red Carpet Bowl to do the same.

“Every school, every university, every college, everybody is going to these virtual ticket sales. It’s so convenient. It’s a cost savings to the organization. The vast majority of our attendees will have a smartphone and be able to facilitate the purchase of a ticket,” Buys said. “It’s convenient for everybody involved. You don’t have to worry about picking up a ticket somewhere. It’s all done on the phone. The paper ticket is just a thing of the past now.”

The 2021 Red Carpet Bowl is scheduled for Aug. 27 at Vicksburg High School’s Memorial Stadium. Warren Central will play Forest Hill in the first game at 5:30 p.m., and Vicksburg will face Germantown immediately afterward.

Ticket prices have not yet been set, but Buys said it will be one price for both games. GoFan also adds a processing fee of approximately $1 for each ticket sold.

Tickets will go on sale in early August. Once they are available, they can be found on GoFan.co or the GoFan app under “Red Carpet Bowl Classic.” Fans should then select their school to purchase tickets.

The Vicksburg Warren School District, as well as many other high schools in Mississippi, started using GoFan for ticket sales last year. Buys said VWSD athletic director Preston Nailor recommended the Red Carpet Bowl do the same and helped them with the transition.

Besides walking them through the logistics of the new system, Buys said having fans already familiar with it was helpful.

“The Vicksburg Warren School District already converting to this was a tremendous benefit. They have been super helpful in guiding us through the process, which is very simple,” Buys said.

Besides being convenient for fans, Buys added that it was a simpler way for the Red Carpet Bowl committee to track ticket sales and finances.

Previously, several thousand tickets were sold at outlets around Vicksburg, which required a number of people to handle cash and track tickets and sales. Now, Buys said, all of it can be easily monitored electronically by a smaller number of people.

“It’s a significant safety feature for us. We would take tickets to every school when we delivered their T-shirts, and the coaches would return to us with the tickets and the money. They would keep it in a pouch somewhere until after the game,” Buys said. “That’s no longer necessary. They no longer have to be responsible for the money or the tickets. It works out great. There will be no cash transferred, it will strictly be electronic.”

In other ticketing news, Nailor announced last week that football season tickets for Warren Central and Vicksburg High will go on sale July 15 through GoFan.co.