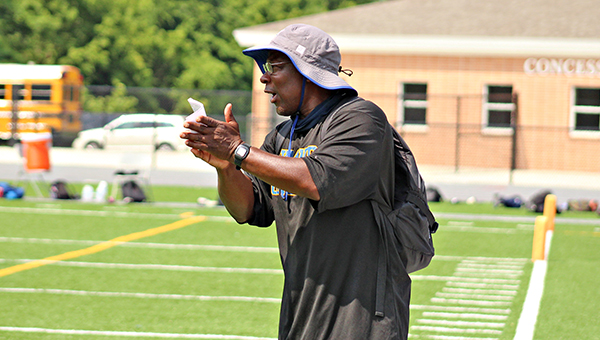 Raymond football coach Michael Fields, left, cheers on his team during a 7-on-7 game in June. Fields, a former St. Aloysius coach, was hired to lead Raymond's program in May. (Ernest Bowker/The Vicksburg Post)

Michael Fields is feeling refreshed and rejuvenated this summer.

After spending a season away from football for the first time in his long coaching career, he’s back with a new team and a new challenge as he tries to turn Raymond High School’s long-struggling program into a winner.

Fields, who was St. Aloysius’ head coach from 2017-19, was hired as Raymond’s head coach in May and said he’s having fun in his second stint at the Hinds County school.

“It’s been very fun. The kids have responded to me well. We’ve had good numbers out. Today we had 30-something on the 7-on-7 bus,” Fields said after a round of 7-on-7 games at Warren Central in late June. “The kids have enjoyed it, and we’ve had a taste of success in 7-on-7. They’re starting to feel what the atmosphere of a winner is like.”

Fields has spent more than 30 years in coaching, including 17 as a head coach at Raymond, Hinds AHS and St. Al. He was previously Raymond’s head coach in 2000 and 2001, then moved down Highway 18 to Hinds AHS until that school closed at the end of the 2013-14 school year.

Fields then came to St. Al and was there through this school year. He was an assistant on B.J. Smithhart’s staff for three seasons, ascended to the head coaching job when Smithhart left in 2017, and led the Flashes to two playoff appearances before stepping down in 2019. He has a 93-95-1 record in 17 seasons overall.

Fields, who is retired from the public school system, remained on St. Al’s staff as its track and field coach through the end of this season. When Raymond called about its open football job, however, Fields was lured back to the gridiron.

“It’s like going back home. They felt real excited about it, and it felt like something I wanted to do and something they wanted. So far it’s been a match made in heaven,” Fields said. “At first I was a little hesitant, but they talked me into it.”

Fields said going to Raymond was a natural fit. He still lives in Hinds County, and has deep ties to the communities along the Highway 18 corridor. He often ferried a number of student-athletes from that area to St. Al over the years, and personally coached them in track during the offseason.

“It was almost like I had never left because I know most everybody over there. All I had to do was jump in and put my system in, and keep working,” Fields said.

And, after seven years of working in Vicksburg, Fields said he feels at home there as well. He said there is a possibility he could continue coaching track at St. Al in the spring and football at Raymond in the fall. He will only coach football at Raymond.

“In some capacity I’m still going to be over there (at St. Al). I feel like I’m at home either way,” he said.

Rebuilding Raymond’s program will not be a small task. The Class 4A finished 4-6 last season, has not had a winning season since 1999, and has one playoff win in the last 30 years.

Fields said since there’s nowhere to go but up, it also takes away some of the pressure to win immediately.

“It’s a big challenge, but no pressure. The challenge is just to bring them back to the olden days of the 80s and 90s when they had a winning tradition, and just to get that going again,” he said.

And, in the meantime, he’s gotten a bit of passion back for coaching football and is having fun.

“I just like working with the kids and developing kids, and just trying to get them to be their best. You never know what’ll happen after that,” Fields said. “It’s just something that’s inside of me. I like to drive kids and try to get them to be better people.”

As it approaches its 60th birthday, the Red Carpet Bowl is entering the digital age. No paper tickets will be... read more