‘Nothing but God’: Vicksburg community rallies behind family that lost home in Monday storm 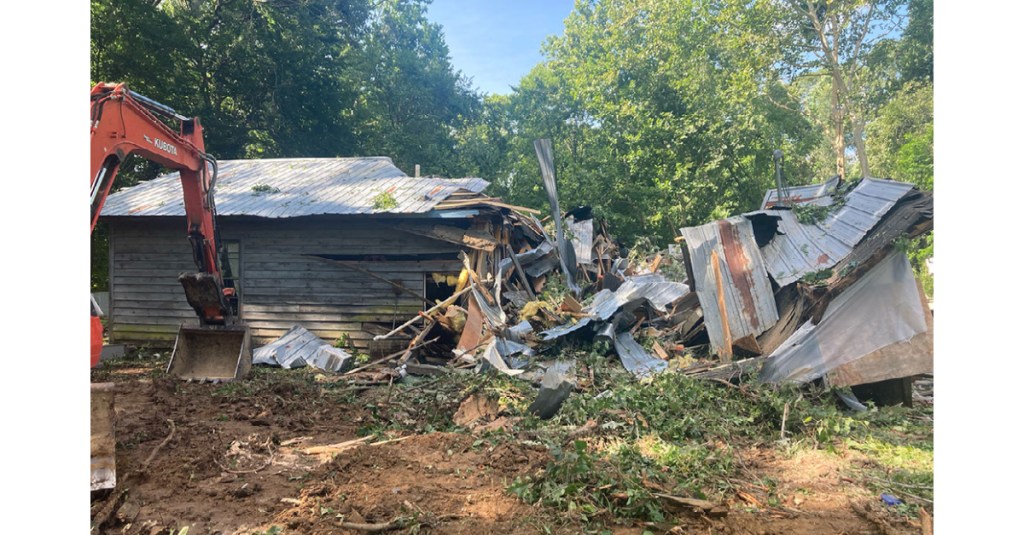 This is the aftermath of a storm that came through Vicksburg early Monday morning that destroyed the Griffin family's home. (Photo by Heather Griffin)

When Austin and Heather Griffin and their children went to sleep on Sunday night, they had no inkling that a storm was coming — one that would affect them greatly.

Heather Griffin woke up to the sound of something crashing and her 11-year-old son’s scream.

“I knew what it was as soon as it hit the house,” Heather said. “But when he screamed, I wasn’t really sure if I should be relieved that he screamed or scared.”

A tree had fallen onto their home and taken out every part of the house except for the two rooms where her family slept. When she and her husband went into the hallway outside their bedroom, Heather said it was raining inside the house, and it wasn’t until then she realized it was storming.

Heather said her first thought was to get her children out of the house.  Her two boys share a room in a third bedroom in the house. But her oldest child, a daughter, was spending the night at her grandparent’s house on Sunday, and for some reason, her 11-year-old decided he wanted to sleep in his sister’s bed that night. Her 4-year-old son wanted to sleep with her and her husband.

If either of Heather’s boys would have been in their bedroom that night, they would not be alive.

“It’s been really emotional looking at it, and it’s not the loss,” Heather said. “It is seeing what we walked away from. Literally, the only thing [the tree] did not touch were the bedrooms we were asleep in. It’s nothing but God.”

This isn’t the beginning of trials for the Griffin family. Over the last 16 months, the family has been subjected to several scary incidents and escaped a total tragedy every time.

Last March, the Griffins’ youngest child found an old knife in the backyard. When their middle child was trying to take it from him, their youngest turned and fell, causing the knife to pierce through his eye. He lost all vision in that eye, but can still process light.

Next came the ice storm in February, which caused another tree to fall onto both of the family’s vehicles. A month after that — and a few days after her youngest child was cleared from his injury — The Griffins’ 11-year-old was involved in a rollover accident that nearly amputated his leg. He was in a wheelchair for three months following the incident, and just recently was able to move without it.

“Our living room was set up for him so he could get in and out of the wheelchair and get in the bed,” Heather said. “Had he been in his bed in the living room, he would have been in the path of the tree.”

Heather said she believes that everything that has happened to them in the last year was to prepare them for this moment of losing their home.

“I think the things that have happened to us in this past year have just really helped us to strengthen our faith and learn to rely on God,” she said. “I think those things prepared us mentally and spiritually for where we are now.”

The Griffins’ home was declared a complete loss by emergency services. They lost everything except their washing machine, dryer and water heater, which responders were able to cut out of the laundry room. But Heather said their community has surrounded and supported them during this difficult time to give them all they need.

A close friend of the family, Holly Sullivan Pell, saw their need and immediately went to work to fix it. Heather’s husband, Austin Griffin, called Pell right after the tree fell on their home asking her to send her husband over to help him. She wanted to do more than just help with the clean up, and she started a GoFundMe for the family after thinking about what she would need if she was in their shoes.

“If my husband needs help doing something, my first words to him are always ‘Call Austin,'” Pell said. “He’s going to drop whatever he’s doing. He’s going to be the first person over at the house to help him out.”

Austin is a volunteer firefighter that is selflessly serving his community, Pell said, and she wanted to do the same for his family. Pell said Heather is also always thinking about others and how she can serve them well.

“They just are totally always all in for people and somebody needs to be all in for them,” Pell said.

The GoFundMe page has received $2,920 so far, and Heather said people from everywhere, even other countries, have been donating to her family. She said she has been blown away by the support Pell and her husband have given her family, but she isn’t surprised because they are the biggest blessings to them.

“They have rushed in to meet every need that they ever see in our life,” Heather said. “I’m just overwhelmed with gratitude.”

In addition to Pell’s GoFundMe, the Griffins said they have received endless support from their community. When Heather was able to leave the house in the morning, she went to the store. When she came home, her friend and owner of JH Dirt & Gravel was there with manpower and machinery, and fellow volunteer firefighters from stations all over the county were there helping.

Those firefighters have gathered donations for the family, including everything from clothes to appliances. Alexa Jeffers, the owner of a local animal rescue, has donated food and shelter for the family’s four dogs. A local church, Yokena Presbyterian, has fed the family dinner. Heather said Austin’s work family at Tyson Foods has gone above and beyond to help them.

She said she didn’t know how they would have handled the loss of their home Monday morning, if not for the community pouring into them in their time of need.

“It’s kind of surreal to know that you have people that care about you that much,” Heather said.

The family is currently staying with Heather’s parents as they decide, after their home’s demolition this week, if they will rebuild there or what their next steps will be.

Pell said that down the line and after the clean-up, the family is still going to need their community’s continued support because it doesn’t end there.

“I know sometimes things can happen and then people get forgotten about so that’s the main thing — just don’t forget about them,” Pell said.

Heather said what she wants most now is prayers and for people to donate to their local volunteer fire department. She said those fire departments run off of donations to get the supplies they need, and many people don’t donate, therefore worrying her as a firefighter’s wife.

“We are going to weather this storm, and in the long run, I would really like for people to not just get behind us but get behind all your volunteer (firefighters),” Heather said. “The volunteers that are going to be the ones that run into their homes and rescue them and their children and their pets when something happens.”

Heather said the constant support from everyone in the community over the last 16 months has been incredible and they couldn’t have gone through all that they have without their community.

“I just want to thank everybody for the love that they’ve poured into us and the sense of community that they have given us and rallied behind us in this time,” she said.