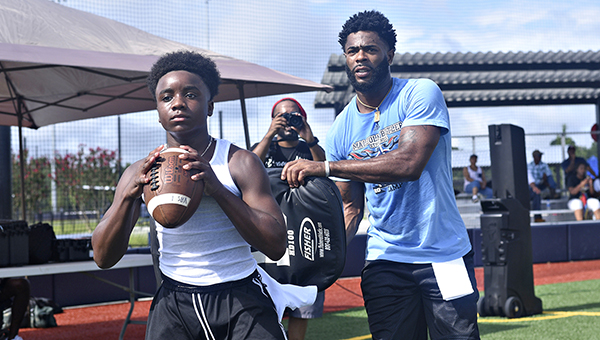 Sam Semi, left, works on a passing drill with NFL star Malcolm Butler during the Malcolm Butler Football Camp in 2019. The seventh edition of the camp is scheduled for (Courtland Wells/The Vicksburg Post)

Like a lot of things, the Malcolm Butler Football Camp took a bit of a hiatus during the COVID-19 pandemic. And, like a lot of other things, it’s coming back stronger than ever in 2021.

The seventh edition of the free camp hosted by one of Vicksburg’s most famous football players will be held Saturday at Vicksburg High School’s Memorial Stadium. It marks the camp’s in-person return after a virtual version was held during last year’s pandemic.

“It is a pleasure. It’s exciting getting back into it,” camp coordinator Cynthia Bell said. “It’s all about the students and the community.”

More than 300 youth and high school players from Mississippi, Louisiana and Tennessee have already signed up, and Bell said 60 to 70 walk-up spots are available on a first come, first served basis Saturday.

There is no charge to participate, but all players must have insurance and their parents must be present to register them.

All campers should arrive at 7:30 a.m. Saturday for check-in, and they must enter through the newly renovated stadium entrance on Lee Street. Activities will begin at approximately 8:45 a.m. and continue until around noon.

Bell said some COVID-19 protocols will also be followed. All campers will have their temperature checked upon entry, and any parents sitting in the stands must wear a mask. Players will not need to wear a mask during camp activities.

“Everybody that walks through that door, we’re taking precautions,” Bell said. “We have students coming from all over Mississippi, from Louisiana, even from Memphis, so we’re taking precautions. It’s also for Malcolm’s sake, because he’s heading to Arizona after this. We just want to be cautious. If you’re sick or have a cold, please stay home.”

Bell also urged campers to hydrate in the days leading up to the camp.

“That’s important. Go outside and get adjusted to the heat. Even though the camp is in the morning, it’ll be 90 degrees by the end of it,” she said.

Near the end of the high school camp, Butler often goes one-on-one in passing drills against some of the players.

“Of course, everybody wants to show a professional football player they’ve got skills like him,” Bell said with a laugh.

Several former Vicksburg High coaches including Tavares Johnson, Marcus Rogers and Bubba Nettles, will be among the instructors this year.

Butler, the former Vicksburg High star, is the camp’s namesake. The cornerback signed as a free agent with the Arizona Cardinals in the offseason and is heading into his eighth season in the NFL.

Butler started the camp in his hometown in 2015, following his rookie season with the New England Patriots. He famously intercepted a pass at the goal line in the final minute of Super Bowl XLIX to preserve the Patriots’ 28-24 victory over the Seattle Seahawks, and won another title with them two years later.