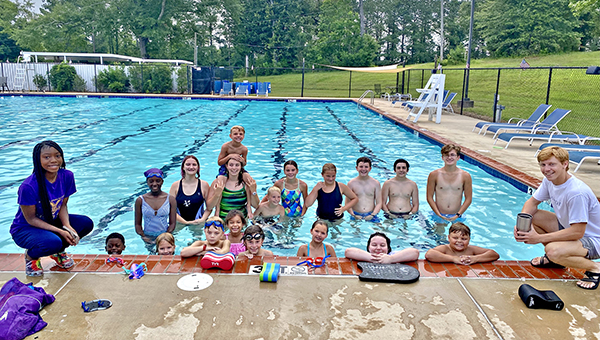 Members of the YMCA Cannonballs swim team pose for a team photo at the Wilkinson-Ver Beck YMCA pool. The Cannonballs were started this summer as a way ton introduce young swimmers to competitive swimming. (Submitted to The Vicksburg Post)

Several members of the YMCA Cannonballs flipped over on their back and pushed off from the pool wall, gracefully gliding through the water for a backstroke drill.

Before long, some were crashing into each other like out of control bottle rockets. Others stopped halfway through a lap to get their bearings, and a couple more blindly groped for the wall as they approached it.

It was clear that these swimmers will not be setting world records any time soon ­— and that’s also the reason for the team’s existence.

The Cannonballs were formed this summer as a way to introduce novice swimmers to competitive swimming. A total of 21 children ages 5-15 joined the team and competed in several meets in June, and they are winding down the season with practices in July.

“We’re not trying to be another Vicksburg swim team. We wanted to be the intermediary program between swim lessons and competitive swimming,” said Phillip Doiron, the executive director of the Vicksburg YMCA. “It was a need we knew was out there, but we didn’t have the right leader. When Wilson (Carroll) came along we knew right away he was the right person for it.”

The idea to start the Cannonballs came from Wilson Carroll, who concedes it was “selfish.” He was hired as the head coach of St. Aloysius’ high school swim team in the spring, and wanted to create a feeder program.

The Vicksburg Swim Association is the city’s primary competitive team, but is a year-round program. Carroll wanted one that was less time-consuming and geared toward allowing those who are just learning to swim to take the next step with the sport, so he came to Doiron and volunteered to organize the Cannonballs.

The Cannonballs’ practices focus on teaching all swimmers the basic freestyle stroke, as well as developing their skills in either backstroke, breaststroke or butterfly.

Carroll added that the Cannonballs are a complement, and not a rival to, the VSA. The Cannonballs are strictly for novices, and Carroll hopes that as his swimmers progress they will have the confidence and ability to move to the year-round program.

“We aren’t competing in any way with the VSA,” Carroll said. “When I volunteered to take over St. Al’s program I wanted to find out a way to get as many people in the water as possible. My hope is that every one of these kids can find another program to transition to in the fall.”

The Cannonballs have practiced most weekday mornings at the Wilkinson-Ver Beck YMCA pool on Oak Ridge Road. They competed in the Jackson Swim Association — a group of similar novice programs based in and around the capital city — in four meets in June.

Unlike other club meets that span two or three days during a weekend, the Jackson Swim Association meets are single-day affairs that only last a couple of hours.

“It’s so much less demanding on families and the kids,” Carroll said. “That’s the nature of a summer league. There’s more than one way to do these programs, and I think we hit the sweet spot this year.”

The final meet brought all of the Jackson Swim Association’s teams together for the City Meet. Five members of the Cannonballs reached the finals in various events.

“I couldn’t do any strokes. Now I can do three of them pretty well,” Cannonballs swimmer Michelle Kleinman said. “My parents forced me to do it, and I like it.”

While Carroll is the director of the Cannonballs program, he is not the head coach. He has given that responsibility to Leah Larson, Layne Sparks and Spencer Carroll, who swim for both the VSA and St. Aloysius. Spencer Carroll is Wilson’s son.

Much like the swimmers they’re teaching, the intent was to allow the high schoolers to learn the ropes of coaching and teaching.

“We’re training the next generation of coaches and lifeguards, which we need around here,” Wilson Carroll said.

All three coaches said leading the Cannonballs has been an eye-opening experience on several levels. Sparks, who is heading into his senior year at St. Al, said learning how to teach others has helped his own swimming technique.

“It makes me feel hyper aware of every little technical thing I’m doing. You’re able to coach yourself,” Sparks said.

Spencer Carroll, another rising senior at St. Al, said being a coach himself has given him a new appreciation for his other coaches.

“It’s fun to watch them advance. I forgot how hard it was for me to learn,” he said. “At the beginning of the season it was rough, but now they’re some of the best kid swimmers I’ve seen. Hopefully they carry on my passion.”

Early indications are that they will. The Cannonballs are strictly a summer program and, while this season is winding down, there are already plans for another in 2022. Wilson Carroll is hoping to double the team’s enrollment and iron out some of the kinks that come with a start-up program.

“Our goal is to have 40 swimmers next year,” Wilson Carroll said. “This was very much a learning experience for us. The coaches had never coached before and the swimmers had never swam before. Next year will be better. Even with twice as many kids it’ll be half as hard.”

Like a lot of things, the Malcolm Butler Football Camp took a bit of a hiatus during the COVID-19 pandemic.... read more