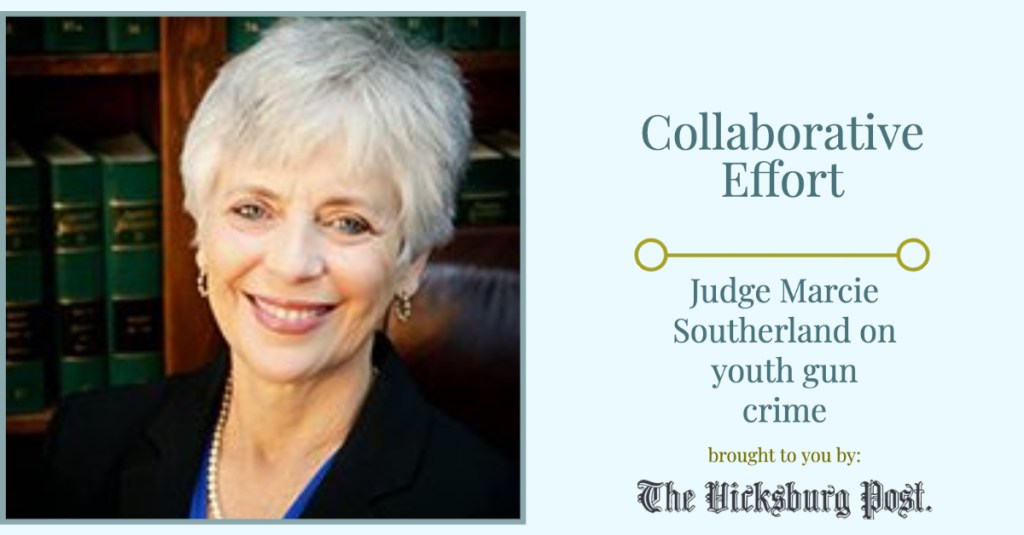 This is the second in a series from The Vicksburg Post investigating youth gun crimes in Vicksburg and Warren County. To read the first story in the series, click here.

A sign in the lobby of the Warren County Youth Court building reads, “Before you pull this trigger, trying to prove a point… go sit in the bathroom for 23 hours and imagine doing this for the next 25 years.”

The sign serves as an omen for the “zero-tolerance policy” of Warren County Youth Court Judge Marcie Southerland when it comes to children and firearms.

There’s been a significant increase in the number of children carrying guns on the streets of Vicksburg over the last year and a half, according to Southerland. However, she said, all hope is not lost.

The cause of acts of delinquency among the youth population cannot be pinpointed, she said, because no two children act out for the same reason. In her courtroom, things are handled on a case-by-case basis.

Once a child uses a weapon in a crime, they are no longer considered a juvenile offender and they are tried as adults under Mississippi state law. Southerland’s role, she said, is to aid in rehabilitating children before they reach the point of committing a crime with a gun.

“We’ve got young people out here on the streets just wreaking havoc, where it used to be you’d see young people in youth court for getting in trouble at school or curfew violations or shoplifting,” Southerland said. “Now, it’s gone to auto burglary, residential burglary and every kid is carrying a gun.”

For gun crimes in particular, there is a concerted effort among youth court officials and law enforcement to determine why children feel the need to carry a firearm in the first place. However, the judge explained, the “why” of the issue isn’t clear-cut.

“When I ask a youth, ‘Why did you have a gun?’ oftentimes the response is, ‘To protect myself,'” Southerland said. “‘Well, who are you protecting yourself from?’ It’s going to be ‘another kid’ or ‘I don’t know,’ or ‘Everyone else has a gun, so I have to have a gun.’

“I don’t think you can attribute it to any one factor.”

A good home life with strong parental guidance is the number-one best defense when it comes to keeping children off the streets and away from gun violence, Southerland said. However, in many cases, the traditional two-parent nuclear family is nonexistent, leading children to seek other outlets for a sense of purpose, guidance and belonging.

“I think that it starts with the family. Oftentimes, the children I see and attempt to serve are from single-parent families,” she said. “Whether it’s a single-parent mom or single-parent dad, it’s the diminishing of the family as we’ve always known it. I’m not being judgmental about that, but that’s the problem.

“It’s really going to be resolved by family structure, community structure, court involvement and treating the family as a whole.”

Treating the family as a whole means providing services to the family and to the child by way of not just government assistance in regards to the court, but also the community and the church-based family, Southerland said. It also means cultivating a sense of accountability and implementing positive role models where there previously were none.

Prior to the coronavirus pandemic, Southerland and the youth court began working with Vicksburg Warren School District to establish a mentorship program for at-risk youth who commit acts of delinquency. However, she said, the program came to a screeching halt along with the rest of the world in March 2020. As the pandemic begins to subside, the mentorship program is being revisited.

“What I hope to have, and what I’ve reached out to several community leaders including some law enforcement folks, is that, if I have a young person in the juvenile detention center, I will pair that child with one of the mentors who, on a volunteer basis,” she said. “(These mentors) will not only come into the youth detention center to start building a rapport with that young person, but will follow that child when they leave the detention center.”

Mentors will be encouraged to take an interest in the lives of their mentees, to join them for school lunches, participate in extracurricular activities and to be a stable presence in their lives.

Above all, especially for boys in the youth court system, Southerland said she hopes mentors will serve as father figures.

“A lot of the young men that are coming into youth court don’t have a strong father figure,” she said. “I think that is a key component in rehabilitation and helping that child move forward in a positive manner. I also think counseling services are key for some of our youth.”

Many local counseling and mental health resources, she said, work with the children she sees in court and are doing a “terrific” job in helping at-risk youth.

Southerland has a self-proclaimed “zero-tolerance policy” for juveniles carrying guns.

If a child in youth court is found to be wielding a weapon, they can expect to receive the maximum consequence for their actions, as defined by the parameters of the court: a stay at the Warren County Youth Detention Center.

“If I find that a young person is carrying a gun, I have zero tolerance for that. And that young person will be placed in the juvenile detention center for the maximum time that is allowed, which is 90 days,” Southerland said. “If that child is carrying a stolen firearm, which is sometimes the case, that rises to a different level. But still, my authority is 90 days in the juvenile detention center, unless it’s egregious enough that they should be sent to the training school.”

Resources on every level

In order to rein in youth gun crime and protect the children of Vicksburg and Warren County, Southerland recommends a multifaceted approach.

The more the community works together, strengthening families, gathering in places of worship, participating in local organizations, the better it will be for local youth, she said.

It’s also going to take a period of re-assimilation into society following months of isolation due to the coronavirus pandemic, as she cited the “exponential” increase in young people involved in criminal activity over the last year and a half.

Above all, she said, the most effective tactic to prevent acts of delinquency among local youth is to reach them when they’re young.

“It starts years earlier than when a child is 13, 14 or 15 years old,” Southerland said. “We’ve got to get to our children in elementary school. Those are the most impressionable years. Once they reach the age of 13 to 15, for the most part, we’ve lost so much of our connection with these children.”

Shots fired into home in Kings